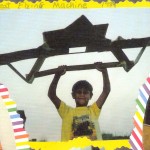 A little tip for the people of the world: If you leave a message on someone’s voice mail, say your phone number slowly. Way more slowly than you would normally speak. So slowly that you think you sound like an idiot speaking that slowly. Too many people rush through that part of the message as […]

A month has passed since 2007 melted into 2008, so it’s time that I should check in on my new year’s resolutions. I have a feeling I’m not doing so well, but let’s see. Finish the novel. Status: Horrible. Excuse: I could say that I’ve been really busy at work—which I have—but that’s no excuse. […]

Today I present to you a simple strategy that could make your life a lot better, as well as an idea that TiVo should adapt before the generic, poorly designed cable DVRs do. Girl Scout CookiesEvery year I struggle to buy Girl Scout Cookies. I mean that literally—Girl Scouts simply don’t come to my door […]

Questions of the Day: Part Two

(This is a continuation of last week’s Monday post, found here.) Question: Why did the political parties choose such smelly, dirty animals to represent their parties? An elephant and a donkey? What’s up with that? Answer: I guess these smelly, dirty animals are the ones that the parties identify with most. Have you ever seen […]

There Will Be Popcorn

I’d like to apologize for the delay in posting this entry. I generally intend to post every day from Monday-Wednesday, with the occasional entry going up on Sunday. However, a variety of factors prevented me from doing so after Tuesday this week. It won’t happen again. Until it happens again. Let’s turn our attention to […]

I’ll be honest—I’m a wimp. I’m scared of pretty much everything. I’m afraid of being mugged. I’m paranoid about spiders nesting under my skin while I sleep. I’m constantly worried I have food in my front teeth. When driving in certain parts of town, I seriously think that I’m going to be carjacked while I’m […]

Jott It Last week, in “My Brilliant Idea, Their Great Idea, and Twins,” I discussed a hypothetical service that would really help me remember what was said during a cell-phone conversation. A key component of the service would be the simplicity—every time you made or received a call on your cell phone, the phone would […]

Questions of the Day: Part One

My friend Josh and I had a unique way of staying in touch with each other during our sophomore year of college. Every day, one of us would send the other a hypothetical question, and the other person would answer it and include a new question at the end of the e-mail. We called these […]

Another Reason Why Not to Live in New York City

As I’ve stated in the past, I have the utmost respect for people who move to New York City to see what “the big city” is like (i.e., the girl in Coyote Ugly). However, for every reason there is to move to NYC (great foreign food, vibrant social scene), there’s a reason why not to […]

Jamey has to dilute pretty much everything he drinks—alcohol, soda, and yes, even the drink of choice for toddlers, juice. The first time I saw him do this, I couldn’t believe my eyes…and yet now I’m used to it. Jamey pours himself a glass of juice, adds water (to quote him, it’s “3/5 juice, 2/5 […]

Every question has an answer. Some are debatable, some are flat out wrong, but none of that really matters when you’re competing at a trivia night run by high schoolers. If they say Europe is the second-most populated continent in the world (correct answer: Africa), so be it. (Sidenote: the purpose of the trivia night […]

My Brilliant Idea, Their Great Idea, and Twins

My Brilliant Idea At my new job, although I spend a fair amount of time at my desk, I’m also up and about quite a bit. I’d say I’m at my desk 60% of the time and not at my desk 40% of the time (for many of you, those numbers may be even more […]

I’m not big on birthdays. Particularly my hands. My hands are especially tiny on my birthday. Seriously, birthdays…not a fan. I mean, I guess it’s significant, but what are we really celebrating on birthdays? Another year of survival? Uh…congratulations? I understand lamenting people on the anniversary of their death, but I’d rather celebrate our lives […]

I was eliminated from my football pool pretty early this year. This was a so-called “suicide pool,” in which you pick one NFL team to win every week. If you choose correctly, you play again the next week, but can’t use the same team twice. Everyone puts in $11 to play, and because the host […]

I spent the last three and a half days (Sunday-Wednesday) at a development conference in Austin (Texas—the subject of this blog is a line from the movie Road Trip that Caroline says whenever I say “Austin”). This was the 2008 Petrus Leadership Conference, which is hosted by a company that consults with Catholic campus churches […]

My Favorite Movies I Watched in 2007

It’s been an interesting year for movies. A number of major films to which I was really looking forward fell short of my expectations. At the same time, many comedies exceeded my highest hopes, and some movies that I didn’t think I’d care for ended up blowing me away. As I tried to rank the […]

Jon Voight Exercise Video This is currently a hot item on Amazon. It’s been remastered from the original, which apparently was made when Voight was much more svelte. Short Story Rejection Update About 40 days ago, I sent out 4 of my short stories to 12 different literary magazines (1 per magazine). I wrote about […]

My Greatest Shame Part 2: The Plunger 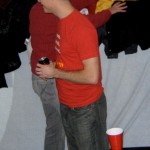 My Greatest Shame Part 2: The Plunger (You can read about my first Greatest Shame here.) It’s happened to the best of us. You use the bathroom, flush the toilet, and suddenly the water starts to go up instead of down. You flush again, desperately hoping that the extra effort will reverse the tides. But […]

Caroline goes to pilates classes every now and then. That’s all fine and dandy, but I kind of wish she’d go to pirates classes as well (if there were such a thing). Sidenote: Japanese people (who have difficulty distinguishing between the spoken “r” and “l”) would have a tough time when signing up for either […]

The new year is upon us…or it’s just another day, depending on how you look at it. Nonetheless, it’s a good time to write about my favorite music, television, and books of 2007. The 2007 Playlist My Rights Versus Yours (The New Pornographers)I Turn My Camera On (Spoon)Falling Slowly (Glen Hansard and Marketa Irglova)Keep the […]