I have a few entries to write on this topic, but this first one will focus on a specific form (and soon to be forum) of communication, books. 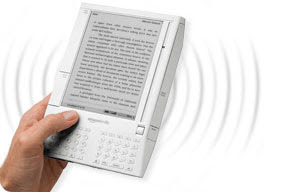 Originally, I was going to begin this entry with a line about how I’ve never actually used an Amazon Kindle, but it seems like a cool concept in need of some improvements (note: I’ve already discussed the Kindle in one entry, but these are new improvements I’ll discuss). However, I had the good fortune of holding and using a Kindle today. One of my coworkers recently bought one, and I had to see it.

Let me tell you…despite the lack of the aesthetic “cool” factor that Apple has mastered, the Kindle’s screen looks great. To have a good idea of what it looks like, open a book. Yeah. That’s what the screen looks like. Seriously. Particularly the typeface. It’s incredible.

I didn’t buy a book while using the Kindle, but I’m sure you’ve heard by now how easy it is to do. Without paying a monthly service charge, the Kindle is always connected to the internet, and if you want a book, you click a few times on the Kindle, find the book on Amazon (there are over 90,000 titles available, and counting), and download it within 1 or 2 minutes. This is huge–this is the reason why Kindle will be successful. Because one of the few things a book can’t do is be in your hands in 2 minutes no matter where you are.

On my previous blog entry about the Kindle, I complained about the price. Having seen a Kindle, and having thought about it some more, I’m not as concerned about the cost. It’s a cost, sure, and you can’t exactly convert your current library to the Kindle, but it’s not that big of a deal.

So that left my other concern, the design. Having seen the Kindle, that complaint stands. It’s all too obvious to me that Amazon was testing the waters with the Kindle, and there’s going to be an updated version that comes out in the future. When that happens, in addition to it looking good, I see the following as a few other improvements that should be made before I’ll buy a Kindle. Keep in mind that I fully understand that Kindle isn’t trying to be an iPhone–it’s not trying to be the be-all and end-all of portable electronic devices. Kindle is trying to be an electronic book, and it’s trying to do that one task very well. The steps to getting there:

I may end up buying a Kindle before these things improvements happen. Maybe they never will. But I see so much potential in this device, and I’m excited that Amazon has created it for the world. I can’t wait for Kindle 2.0–that’s when I’ll be able to determine if Amazon is working on taking Kindle to the next level, or if they’re just going to produce the same thing in a slightly more sexy package.

This entry was posted on Wednesday, February 13th, 2008 at 11:35 pm and is filed under brilliant innovations, Kindle, technology. You can follow any responses to this entry through the RSS 2.0 feed.