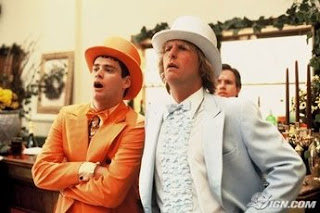 Today I bought a suit.

This may not seem like a big deal to many of you, but this is not something I would normally do. In fact, it’s not something I’ve ever done. All of my suits were given to me by my father—some fit perfectly right away, others needs a few nips and tucks. But I’ve never pulled out my wallet for a suit.

Not only that, but I don’t really shop for clothes. I don’t think I’ve bought an item of clothing other than shoes in about two years. And when I have bought clothes since college, it’s almost exclusively been online. (Okay, there’s one exception. I bought a coat at an outdoor market in Oxford, England, last spring. So I guess I could say that I’ve exclusively shopped in Oxford over the two years.)

My father’s suits have held up pretty well, and they’re great for business-type work. However, I don’t own a flashy suit, something that turns heads when I enter the room. This hasn’t been a problem so far. But in 11 days, I’m going to be attending a rather large Gala that I have organized. I need to look good. I’m also going to approximately 58 weddings this year, and I need a nice suit for them as well.

Again, I don’t like to spend money on clothes, so that’s why the salesman in the Calvin Klein department of Dillards found me weeding through the 75% off rack. I asked for a black suit, and he respected my frugality by showing me some suits that were on sale. They looked nice, but none were solid black. None had that sheen that says, “Yeah, this is a fancy suit. Drink your cocktail and move on.”

And then we found it.

As soon as I put on the coat, I knew it was a match made in Dillards. I looked good. We found the matching pants, and they fit. The ensemble looked great. I have a nice white shirt, but I had a different vision in my head…a vision of my upper half ensconced in baby blue. So we found a shirt that was exactly what I wanted. I was about to go to the register when I decided to get a tie too. I own plenty of ties, but not a single solid color tie. I wanted this outfit to be the epitome of simple elegance.

It was when I found the perfect tie—a solid light pink with a sheen to match that of the suit—that I looked at the price of the items that I had thrown together. Waiting to look at the price is another trait that I don’t have. I’m always looking at the price, calculating whether or not I should get a salad at a restaurant based on the entrée I crave, balancing the price of a new piece of technology against what I could be paying three months later or how much I’ve spent on similar items over the last 18 months. The price is everything to me.

But for once, I didn’t want to worry about the price. I wanted to get the perfect suit, the perfect outfit, and when I looked at the tie and saw that it was $49.99, I realized I was in for a shock at the register. And I was. It was a lot. But after the eighth wedding I attend this year, the price per occasion will be minimal. It’ll be worth it.

I came home and tried on the entire ensemble. I’m not a humble man, but I try to pretend to be humble. I’m not going to pretend right now. I look damn good in this suit. In that suit, I’m the guy grooms should be worried about. Old ladies are going to look at me in that suit at the Gala and wish I came with a pricetag in the silent auction.

Okay, I’m probably going overboard. But seriously. It’s a nice suit. For now, I have no buyer’s remorse. We’ll see if that changes after the suit is covered in cat hair and wine stains.

This entry was posted on Monday, March 24th, 2008 at 11:03 pm and is filed under Uncategorized. You can follow any responses to this entry through the RSS 2.0 feed.

No Responses to “The Suit Fits”