“I’m like Mozart! And you’re like that guy who was always jealous of Mozart.”
“Salieri?”
“No thank you—I already ate!”

As you can probably tell, I love movies. Especially big-time summer event movies. But ever since the Matrix premiered in late March of 1999, “summer” has officially begun well before April showers yield to May flowers. Already, one of my highly anticipated movies, Forgetting Sarah Marshall, has been released. But there’s plenty to come. The master list, in chronological order, is below. Print it out and pin it to your wall so you know what to do every weekend for the next 4 months.

Before I start, in honor of Take Your Son/Daughter to Work Day, you should know that I wrote today’s entry with help of my longtime stuffed animal, Koala. Yeah, that’s right, I have a stuffed koala. Deal with it. You know you also have a stuffed animal you’ve had since you were a kid. 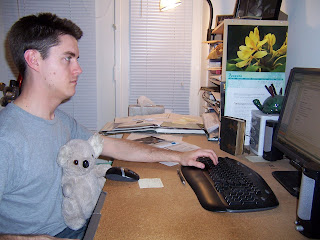 (Note: This got pretty long, so I’ve broken it up by month. I’ve combined April and May, and the other months will be released over the next 3 days.)

Baby Mama (April 25): I wasn’t looking forward to this for some reason, but after two amazing episodes of 30 Rock, I’ve learned that anything Tina Fey writes turns to gold. Plus, the most recent trailers are quite funny.

Iron Man (May 2): One of the movies I’m most looking forward to this year. The press seems to think that Iron Man isn’t as endeared by fans as Spider-Man and the X-Men, but I don’t think the press was ever a little boy. All little boys know that they aren’t going to shoot webbing from their wrists or be able to heal the deepest wounds within seconds. But they know that anyone can climb into a suit of armor and fly around and shoot energy blasts from their fingers. Iron Man is going to be awesome.

Son of Rambow (May 2): A considerably smaller film than the others listed below, this is a movie about a few British boys shooting a sequel to Rambo in their backyard. I love movies that transport me to my childhood innocence (age 0-25), and I expect both this movie and Iron Man to do just that.

Speed Racer (May 9): I’ve never seen the show, and I’m sure it’s pretty bad. However, despite all their eccentricities and inability to make decent sequels, the Wachowski brothers know how to film a race scene. If you’ve seen the Speed Racer trailers, you know that you’re in for a crazy, crazy ride. I can’t wait.

Chronicles of Narnia: Prince Caspian (May 16): I have to admit, this is the first big movie of the summer that I’m not all that jazzed about. The first movie felt like cotton candy to the gritty hard tack of the Lord of the Rings movies. It felt like nothing was at stake, and it exposed the paper-thin story arc and characterizations in C.S. Lewis’ novel. However, I love big fantasy movies, so I’m sure I’ll see this one on the big screen.

Indiana Jones and the Kingdom of the Crystal Skull (May 22): I will laugh in the face of Walden Entertainment when Indiana Jones is released just 6 days after Prince Caspian. This will be a amazing movie, an epic film that will transport us another universe so tantalizingly close to our own. Indiana himself is one of the best characters in any movie, and I don’t care how old Harrison Ford is. He could wheel himself into the Temple of Doom in a wheelchair for all I care.

The Foot-Fist Way (May 30): This is going to be a great summer for comedy, and I have feeling that this little guy will stand out among the rest. I know too little about it to say much, but I’ve heard great things, so I’m in. (By the way, when I say I’ve “heard great things,” that means I’ve read some positive advance reviews on Ain’t It Cool News. That’s the movie site to use.)

This entry was posted on Thursday, April 24th, 2008 at 11:26 pm and is filed under movies. You can follow any responses to this entry through the RSS 2.0 feed.

No Responses to “2008 Spring/Summer Movie Preview”