Two weeks ago I wrote about some new pizza joints in St. Louis. After trying Katie’s Pizzaria and Pi, I included them in my overall rankings for St. Louis pizza. Dewey’s still came in first, with Black Thorn’s goopy deep dish in second, and Pi in third.

However, I’ve had many a sleepless night since I wrote those rankings. Tossing and turning in my bed, I’ve muttered the names outloud: “Dewey’s…Pi…pizza…pepperoni…mushrooms…which is better?”

Which is better? I couldn’t tell. I haven’t eaten Dewey’s in months. So today I called up a true pizza connoisseur (Trevor) and asked him if he wouldn’t mind participating in a pizza-off with Caroline and me.

I ordered Dewey’s from work, waited a few minutes, ordered Pi, and headed out to Dewey’s. The pizza was ready when I arrived, and I was delighted and surprised by the sheer size of the box. This is a LARGE pizza we’re talking about. However, they got the toppings wrong—they gave me pepperoni/sausage instead of pepperoni/mushroom. Not a big deal, but a minor annoyance.

I got back on Delmar, encountered a huge amount of traffic, causing the Dewey’s pizza and the Pi pizza waiting for me to chill a little bit, but that didn’t matter much. Pi gets extra points for having super hot hipster waitresses. 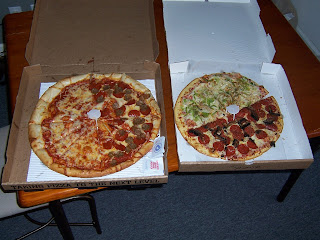 As for the actual pizzas, Dewey’s had the better crust and cheese, Pi the better sauce, toppings, and spices. However, as an overall product, both Trev and I rated Dewey’s higher, and Caroline preferred Pi. Dewey’s crust is key…it’s really light and flaky, almost like phyllo.

So I can finally sleep at night again. Dewey’s is the king of pizza in St. Louis. It’s official.

This entry was posted on Wednesday, April 16th, 2008 at 10:51 pm and is filed under Uncategorized. You can follow any responses to this entry through the RSS 2.0 feed.