Common Misconception #2: If You Give a Mouse a Cookie

Following my previous entry on common misconceptions (“He who smelt it, dealt it”), I have another bone to pick. At this very second, millions of children all over the world are being incorrectly taught a life lesson. Teachers and parents are lying to their little angelic faces. Frankly, it’s disgusting. It’s downright wrong. The common misconception?

That if you give a mouse a cookie, he’s going to ask for a glass of milk. 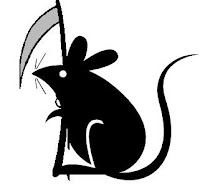 Okay, okay, let’s back up, because I know I just rocked your world. You’ve probably built the foundation of your life on the lesson you learned in kindergarten (German for “eat paste”). The lesson that if you are lucky enough to procure a cookie, and out of the generosity of your heart you give it to a wee woodland creature, that little mouse is going to turn around and expect a glass of milk. And then a straw. And then a mirror. And so on until that mouse owns a 49% vested interest in you and can make you dance like a jester in the moonlight.

(Yes, I just censored myself. This is a family blog.)

F**k that mouse. That’s the lesson. For children, it’s crystal clear: Mice will ruin your life. And not even mice (plural). One single mouse is enough to wreck your dreams and leave you sharing a prison cell with a gold-toothed gang banger named Hard Knox. One mouse will mess you up.

So as children, what did we do? We went home and helped daddy put mousetraps all over the house and checked them daily. We baited them with cheese. We bought outdoor cats and trapped them inside so they’d get cabin fever and hunt down the mice with a wild-eyed vengeance. We made inflammatory t-shirts that read, “Got milk? A mouse drank all mine.” We posted fliers in our neighborhood that said, “If you give a mouse a cookie, you’re a Communist.”

This is the life of the average American child. They deserve better than to live in fear and loathing.

The turning point in my life came soon after I graduated from college with an MS degree (Mice Slaughter). I was rooming a with a friend who was doing research on mice. Torturing them by growing ears on their backs, making them smoke cigarettes, etc. Standard stuff.

One day he received an anonymous grant from a wealthy benefactor. The donor left a sizable amount of money in a third-party bank and asked my roommate’s research team to answer one question: If you give a mouse a cookie, will he ask for a glass of milk?

Short on funds for their other projects, my roommate and his team were happy to accept the new assignment. Like you’re thinking right now, their unanimous hypothesis was that the mouse would indeed ask for a glass of milk.

And then the mice would kill them all.

Needless to say, the security surrounding the mice was extremely tight. Under normal testing conditions, mice were kept within thin plastic bubbles. But with cookies involved (and potentially milk), the mouse was sealed within bulletproof steel walls lined with concrete and adamantium. The only access the researchers had to the enclosure was a mechanical arm with a slot on the outside for cookie insertion. They could view the interior through a camera inside the box.

Their rosaries said, their wills notarized, the scientists inserted the first cookie into the arm and lowered it into the box. They waited. For a few minutes, nothing happened. Then, movement. The mouse crept from a corner and sniffed the cookie. He examined it. Finally, he nibbled on it, taking tiny chunks into his claws and devouring them like the souls of children.

And then, he stopped. He walked back to the corner and went to sleep.

The scientists, none of whom had breathed since the mouse took his first bite, exhaled with relief. The unthinkable had happened. They had given a mouse a cookie, and the mouse had made no request for a glass of milk. Not even a saucer of milk. They were confused, bewildered, but overjoyed.

1,382 test subjects later, the results were clear: If you give a mouse a cookie, he will most certainly not ask for a glass of milk. The claim, originally made by Confucius, and later by children’s author Laura Joffe Numeroff, is simply not true.

I know, this is a lot to take in for one day. But the truth must be known. Loyal readers, you can sleep well tonight knowing that mice need not be feared. You no longer need to worry that if you give a mouse a cookie, you’ll end up sucking on moldy croutons on Roosevelt Avenue while sharing a garbage bag with a lupus-ridden man named Pinches.

This entry was posted on Tuesday, May 13th, 2008 at 9:20 pm and is filed under Uncategorized. You can follow any responses to this entry through the RSS 2.0 feed.

No Responses to “Common Misconception #2: If You Give a Mouse a Cookie”