JoshVision–It’s Not the Years, Honey. It’s the Mileage.

There are certain advantages to having JoshVision. I can always tell just before a waitress is about to spill a beer on me. I can also sense when someone is uncomfortable at a party. And on occasion—and this is the rarest of occasions—I get a glimpse into the future.

Tonight I used this power for the good of humanity and witnessed an advanced screening of Indiana Jones and the Kingdom of the Crystal Skull. The following is my spoiler free review. (Editor’s note: Josh entered a local contest with the following Indiana Jones photo of himself. See also the big winner and the runner up at the end of this entry. These are probably the property of someone else, so I’d like to give that person credit.)

First though I have to preface it with something. Raiders of the Lost Ark is my a 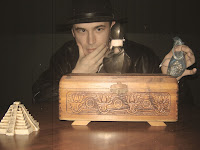 ll-time favorite movie. I just watched it again this past weekend to get back in the Indy mood and it still amazes me. So needless to say I was both pretty damned excited and slightly apprehensive to see this flick. Why apprehensive? Because I’ve seen what George Lucas can do to a movie, to his own movie franchises and thus to the bits of my childhood that I still relish. I mean, we all saw the Star Wars Prequels, right? Would Lucas do the same to Indy that he did to Vader? Or would Spielberg be able to reign him in and replicate the awesomeness of Raiders, Crusade, and to a lesser extent, Temple of Doom?

The answer, my friends, is a sad one. Kingdom of the Crystal Skull pales in comparison to its predecessors in almost every way. Since this is a spoiler free review, I can’t really tell you why it was so disappointing, though. Let’s just say there’s a major part of the plot that simply has no business in an Indiana Jones movie. Absolutely no business. It’s really a shame because I sort of liked the movie other than this one thing. The action scenes are great. Harrison is just as cool as he’s always been in that hat. Indy’s charm and wit still shine.

Unfortunately for me and my continually fleeting childhood, that single plot element remains. You’ll know what I mean when you see the movie. It’s a VERY big deal. And I hated it.

Don’t take my word for it. Go see this movie on Thursday with the rest of the common folk and judge for yourself. Maybe you’ll like it. If you don’t, my childhood and I will be here waiting. We can all weep softly together. 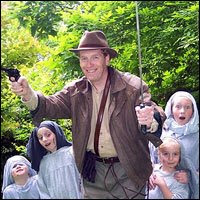 This entry was posted on Tuesday, May 20th, 2008 at 9:36 pm and is filed under movies. You can follow any responses to this entry through the RSS 2.0 feed.

No Responses to “JoshVision–It’s Not the Years, Honey. It’s the Mileage.”