Four Weddings and a Fundraising Event

I attended four weddings over the month of May—one on each of the last four consecutive weekends. Each one was unique and memorable. One was a Hindu wedding where the groom rode in on a horse. Two were Catholic—one of which had a 25-minute ceremony, the other a 105-minute ceremony. One was the first wedding of all my college friends. I was an usher in one of the weddings, a spectator in the rest. I saw a man of honor (instead of a maid of honor) put on a dress during his toast so that, in his own words, “he didn’t want it to be weird.” Out of the estimated 1,050 people to attend the four weddings, I was the last person to finish eating every single time. And Caroline was my lovely date for all of them.

For this last wedding, we were in Indianapolis, a city which, with all due respect, has no worthwhile sustaining attractions (I say “sustaining” because the Indy 500 is a great attraction, but that’s one day a year). There was a koala exhibit at the zoo that I was interested in, but Caroline told me that all koalas carry some form of Chlamydia. That kind of detracted from their cuteness.

Before I left town, I looked up Frank Lloyd Wright houses online on a whim, just in case there was one in Indianapolis. There wasn’t, but there was a place northwest of the city in West Lafayette (where Purdue University is located). It just so happened that this house, which is still occupied, was having its third annual garden party fundraising event this weekend. I’m a believer in acting on odd coincidences, so even though I’d never heard of this house—called Samara—Caroline and I decided to go. (I haven’t mentioned it in a while, but I’m writing a novel about Frank Lloyd Wright’s legacy, so I’m interested in anything he designed.)

It was fortunate that Caroline looked at the information about the party before we got there. We were dressed very casually, as I thought that “garden party” just meant an outdoor gathering. I thought standard outdoor attire would be fine–sandals, jeans, t-shirt. Caroline explained that it’s usually a dressier event, so we pulled over to a rest stop and changed into nicer clothes. It turned out that people didn’t dress all that nice, but I would have been at the bottom rung with my “Pour Out a 40 for 40” t-shirt.

As we neared the location of the house, we realized that we were driving through a residential neighborhood. “What if,” Caroline said, turning to me, “what if we show up and it’s just us, some old dude, and a few of his friends?”

For better or worse, though, when we showed up, we found this: 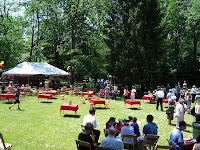 So yeah, we weren’t the only ones there. It was a beautiful day, and they were running constant (albeit quick) tours of the house. There was a youth symphony playing most of the time, and the price of admission awarded us some snacks and frozen custard.

I wish we could have taken photos inside the house, because it’s hard to describe how awesome it was, particularly the living room. It was huge, and felt even bigger due to the positioning of the couches, the high ceilings, and the floor-to-ceiling windows. I couldn’t imagine a nicer living room. Hopefully I’ll have one like that someday.

We lingered for about an hour after the tour, enjoying our treats on a shady hill overlooking the grounds. I briefly eavesdropped on a Japanese man and his child who were speaking the native tongue behind me in the custard line (highlights of the conversation: “Are you looking forward to the ice cream?” “I am!”). And that was pretty much it.

All in all, a worthwhile detour and a fortunate coincidence. Also, due to the change in route, we had to go through Champaign, Illinois on the way home. Edging out the University of Illinois for the biggest thing in Champaign? Potbelly’s. Yeah, we stopped there.

Four weddings and a fundraising event. It’s been a busy, but memorable, May. 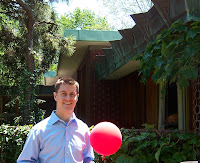 This entry was posted on Sunday, June 1st, 2008 at 10:32 pm and is filed under fundraising. You can follow any responses to this entry through the RSS 2.0 feed.