I Lived Through a Tornado That Touched Down 12 Miles from My Work: A Survivor’s True Tale of Survival Against All Odds 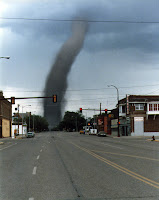 At 2:25 this afternoon, a deadly funnel cloud touched down 12 miles from where I work. 9 hours later, against all odds, I’m alive.

I am a survivor. This is my story.

I was sitting at my desk this afternoon at work, warily eyeing the rapidly darkening sky outside my office. I was hoping to finish up work and run some errands, but I kept getting interrupted by my job.

I was on the phone for a little while and then worked on some other random tasks. Around 2:50, I walked into one of the other offices and found a few employees. “Where were you?” they asked.

I told them that I had been in my office. They replied that they had been the basement for a tornado warning (or watch, whichever one means that someone had actually spotted the tornado) for the last half hour. While a funnel cloud sucked the earth into the heavens 12 miles away, I sat unaware in my office, blithely passing the time.

Against all odds, I survived a tornado that touched down 12 miles away. So can you. Here’s how:

Be Aware of Your Surroundings. A little after 2:00, my phone rang. For the next half an hour, I found myself chatting with a donor (money, not organ) and board member on my phone. Midway into the conversation, the maintenance guy dropped by my office and pointed to the floor with both index fingers.

I’m a man of many skills (I empty out the cats’ litter box like clockwork, I can juggle a soccer ball hundreds of times without dropping it, and I usually know which months have 30 days and which months have 31 days), but I’m horrible at talking on the phone and listening to another person at the same time. So I assumed the maintenance guy was telling me he was going to sweep the floor, and I gave him the thumbs up. Just do it, you know? No need to ask permission.

A few minutes later, he reappeared at my door. This time, he motioned downward with more of a sense of urgency. Again, I confirmed that I had received the message (which I suspected to have something to do with the basement at this point, but had absolutely no idea that he was telling me to go huddle below ground), and went back to listening to the donor.

Stay Away from Windows. I work in an old house, so the walls are thick and the windows are small and iron-plated. However, they’re still glass. It’s a well-known fact that if a tornado strikes nearby, all of the glass in the building will break into shards and target you. So the key is to go to a room that doesn’t have windows, or, if you must continue your work so you can leave early on a Friday, merely turn away from the windows.

Listen Up: Tornado sirens often boom through the streets of St. Louis. Disregard them. I’m a light sleeper, but I’ve learned to tone them out. The key is to listen for the sound of an approaching train, which is what I’ve heard an approaching tornado sounds like. So if you don’t live anywhere near train tracks, but you here the toot and whistle of a 19th-century engine car, turn away from all windows (and either duck and cover or stop, drop, and roll, or both).

If you follow those three simple guidelines, you’ll be sure to survive a tornado 12 miles away. If not, you don’t stand a chance.

See also: Lived Through a 5.2-Magnitude Earthquake: A Survivor’s True Tale of Survival Against All Odds

No Responses to “I Lived Through a Tornado That Touched Down 12 Miles from My Work: A Survivor’s True Tale of Survival Against All Odds”