I just finished watching an episode of The Daily Show from last week on my TiVo. Mike Myers was the guest. Even though this should be expected of a comedian, I was caught off guard at how funny he was. I was laughing out loud for a good portion of the interview. Jon Stewart, who is great at helping unfunny people seem funny, just sat back and let Mike Myers do his thing.

This was so surprising to me because it’s been a long time since Mike Myers has made me laugh. As Josh noted in his JoshVision entry a few months ago, “It’s like Mike Myers is in an SNL skit in which he’s doing an impression of himself in a bad movie.” That’s every live-action movie he’s been in for quite some time. I still go back and watch Austin Powers (the first one) and Wayne’s World (1 and 2) from time to time, because they’re hilarious classics, but it never even occurs to me to watch The Cat in the Hat or the Love Guru. In all the high production values, Mike Myers’ pure comedic ability is lost.

Thus my surprise when I saw him on The Daily Show. Without a crazy costume or expensive props or sound effects or midgets, he was hilarious. His jokes weren’t high-brow by any means. But take away the build up and the inevitable reaction shots of other actors, and his jokes were funny. Refreshingly funny. 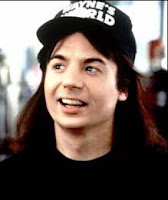 I’m hesitant to say what Mike Myers “should” do, because he doesn’t need to do anything—I’m sure he’s filthy rich—but I’ll say what I’d like him to do as a fan and an audience member. I’d like him and Dana Carvey to make Wayne’s World 3. But not like he did Austin Powers 3—no huge budget or giant set pieces or Beyonce. Limit the entire movie to three sets: the basement, obviously, the restaurant, and maybe the car. Build the sets, and then have Mike Myers sit down with Dana Carvey and write the movie. I saw the latter’s standup comedy on HBO recently—he’s also still hilarious. Together they could write a great Wayne’s World movie.

Given the poor showing of The Love Guru at the box office, Mike Myers may not be making movies for a while. It’s gotta be discouraging to see your pet project fail. But maybe he’ll channel that into some creative energy. Maybe he’ll take the challenge of making a funny movie again. And maybe, just maybe, he’ll read this blog and complete the Wayne’s World trilogy in triumphant fashion. Bigger is not necessarily better when it comes to movies. We’ll see if he and his producers heed my advice.

This entry was posted on Saturday, June 28th, 2008 at 9:46 am and is filed under Uncategorized. You can follow any responses to this entry through the RSS 2.0 feed.