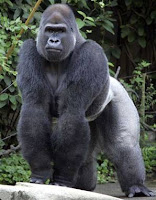 A recent study at the Addictive Behaviors Research Center at the University of Washington published the following in Applied Cognitive Psychology:

“To show that people can suffer impairment after one drink, subjects were asked to count the number of times a ball was passed during a 25-second basketball video. When a person in a gorilla suit walked past the players in the video, beat its chest, and walked off, only one-fifth of the subjects who had had one alcoholic drink noticed.”

First, why are researchers spending time on this? I mean, you don’t have to be out there trying to cure cancer, but is it really a good use of time and money to try to prove that one drink can impair someone? Say, best case scenario, you prove that one drink is just as powerful as ten drinks. Huge breakthrough. Beer companies stock prices plummet. But would anyone actually think twice before having a single beer? I don’t think so.

Second, and much more importantly, what’s the deal with the guy in the gorilla suit? How many drinks has he had? Shouldn’t you be studying him?

Last, What’s the point here? That people who throw back a Bud or two aren’t going to notice gorillas? Perhaps there’s a gorilla problem in Seattle (where the study took place), but we’re pretty much gorilla-free in St. Louis. While we’re calmly sipping our beers, people in Seattle are frantically looking in all directions for gorillas whenever they crack open a cold one.

I mean, just as a general rule of thumb, if your city has a gorilla infestation, you better get out of there. Silverbacks are damn mean. That’s not an environment you want to live in, much less drink socially in.

The solution is clear: Move away from Seattle. Come to St. Louis. We may allow smoking in bars (for now!), but at least we’re gorilla-free.

No Responses to “St. Louis: A Gorilla-Free City”