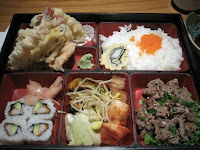 I’ve had the pleasure and the honor of living in Japan on three separate occasions: Twice in high school for summer-vacation homestays in Hiroshima, and once in college for my junior year in an apartment in Kyoto. I kept extensive journals of my time over there, and I sent the majority of the content of those journals home to family and friends in the form of weekly e-mails. Most of what I wrote was less than riveting, but there are a few stories that stand out in my mind as worth telling again. Some of them, like the following story, have never been written down before. This is the Hayaben Story.

Japanese kids go to school year round, so when I had my first homestay in Hiroshima in June (a dreary, rainy month in Japan—never go in June or July)—I attended high school classes every day. I had only been studying Japanese for a few years, so I didn’t understand most of what the teacher was saying. I spent the majority of my time observing the odd behavior of my classmates.

You’d think that Japanese kids would be polite and respectful in class, carefully recording every word the sensei said, never speaking out of turn. That’s not the case at all, or at least it wasn’t at Johoku High School. The kids basically did whatever they wanted during class. The real school started in the evening, when they’d bury their heads in books to study for entrance exams.

The best part of class was lunch. The kids would wolf down their food and then leave the classroom to walk around the complex, buying treats and socializing with other students. I always looked forward to the break from the drudgery of class, and it was fun to talk to the other students at that time.

However, as noted before, I’m an extremely slow eater. It usually took me most of lunch to finish my bento box, a little compartmentalized box of food that my host mother prepared for me every day. This left little time for socializing.

One day, for no reason in particular, I decided to eat my meal as quickly as my Japanese counterparts. So when the lunch bell rang, I pulled out my bento box and started eating. After a few bites, a few of the guys around me looked at me and commented, “Ah, hayaben!”

Now, “hayaben” is the combination of two words, haya and ben. Haya means fast, and ben is the ben from “bento,” so it’s essentially “meal.” So I thought these guys were saying, “Ah, fast lunch!”

“Yes!” I thought. “Look at me! I’m so fast! So fast!” I continued shoving food in my mouth at an alarming rate, my chopsticks twittering away like quilting needles.

It wasn’t long before I looked around and noticed something odd. No one else was eating. No one else even had their lunch out.

At first I thought that there was some reason everyone wasn’t eating, like it was National Happy Free Lunch day or something. But that wasn’t the case. It simply wasn’t lunch time.

I realized my mistake as I finished the last of my rice. Although “haya” means “fast,” it also means “early.” So while this hungry American was packing his face with food, the Japanese kids were saying, “Ah, early lunch!” (and thinking, “What the hell is up with this guy? Doesn’t he know the rules?”)

I learned my lesson. From that day on, I waited until the other students pulled out their lunch before I did the same. I’m sure those kids forgot about the incident by the next day, but I still remember the day I ate lunch so fast. And so early.