I was talking with two of my cousins (21 months and 3 years old) at a family reunion this weekend, and they informed me of a spider they had seen around the house. Not just any spider, mind you. A tiny spider, an “itsy-bitsy” spider, if I may quote the progeny.

Needless to say, I was concerned. A large spider I can track, locate, and dispose of. An itsy-bitsy spider? Much harder to detect, and possibly carrying many times the poison of a larger peer. My cousins were in danger, and I had to help them. But I needed more information.

The word on the street was that this spider, while seeking prey, had ascended a water spout somewhere on my house. My cousins wouldn’t specify exactly where. Fortunately, there had been a mid-afternoon thunderstorm, just a quick shower, and the spider was flushed from his sniper’s perch.

But no, this eight-legged foe wouldn’t be deterred. Allegedly, he climbed back up the water spout and regained his strength while basking in the sun. There he waited for my cousins to walk by.

The kids didn’t seem all that concerned, but I wasn’t about to let such a creature sink its fangs into them. I too ascended the water spout, fighting against the harsh midday sun to reach the roof. Try as I might, I could not locate the spider, and my mother expressed her concern that me prowling around on the roof like a gargoyle was a bit of a safety hazard.

So I gave up my search, leaving behind the hope that the spider found smaller prey—a bird, squirrel, or opossum—to feast upon. Just in case it still thirsted for human blood, I allowed my youngest cousin to take a nap on my chest. Ever vigilant, I also fell asleep after a few minutes.

Everyone was fine at the end of the day. 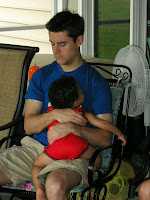 This entry was posted on Monday, June 23rd, 2008 at 10:39 pm and is filed under Uncategorized. You can follow any responses to this entry through the RSS 2.0 feed.

No Responses to “The Spider”