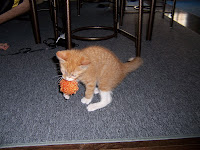 Ever since Caroline and Catface moved out, the kitten has been searching for a new favorite toy. It’s tough to beat a small, easy-to-scare ball of fur.

The other day, I moved the couch to get a q-tip the kitten had knocked out of reach (the kitten LOVES q-tips), and I discovered a whole array of toys, q-tips, and hairbands. I pulled them all out to the open floor. The kitten sat there, stunned. Like a kid in one of those candy stores at the mall, he didn’t know where to begin. Too many colors. Too many flavors.

Finally he selected this little furry ball. Since that day, the ball has become his new best friend. He trots around with it in his mouth. He dribbles it down the hall like a soccer ball. And with a jerk of the neck or paw, he throws it up in the air and tries to catch it. He loves orange ball.

Today I was in the bedroom when the kitten dropped the ball at my feet. Thinking he wanted to play fetch, I picked up the ball and threw it down the hallway. But the ball didn’t roll very far—it was heavier than normal. And my hand was wet.

I immediately realized what had happened. A few minutes before that, the kitten had been playing with the toy in the bathroom, and he had thrown it into the toilet. Not only that, he had somehow retrieved it from the bowl.

I was a little disgusted, but I washed the ball and my hands and got ready for poker.

Lightning doesn’t strike the same place twice, right? Wrong. Halfway through poker, one of the guys came back from the bathroom and said, “Hey Jamey, it looks like there’s a…well, a little orange ball in the toilet.”

I think I’ll keep the lid on the toilet from now on.

This entry was posted on Wednesday, October 1st, 2008 at 11:13 pm and is filed under kitten. You can follow any responses to this entry through the RSS 2.0 feed.