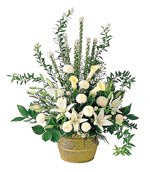 I’ve had the pleasure and the honor of living in Japan on three separate occasions: Twice in high school for summer-vacation homestays in Hiroshima, and once in college for my junior year in an apartment in Kyoto. I kept extensive journals of my time over there, and I sent the majority of the content of those journals home to family and friends in the form of weekly e-mails. Most of what I wrote was less than riveting, but there are a few stories that stand out in my mind as worth telling again. Some of them, like the following story, have never been written down before. This is the Death Flower Story.

When I was studying in Japan in college, I had the good fortune of having a private cooking sensei (that’s right-unnecessarily foreign word in italics. I just went there. Deal with it). Every week I’d bike over to her place and cook with her, and then we’d eat with two high school girls who sensei was supposed to be teaching English. I was also supposed to be speaking English with them. However, no one had any interest in actually speaking English, so that never happened.

The two high school girls were Yuu-chan and Rie-chan. On the ill-fated day when this story takes place, I remembered that it was Yuu-chan’s birthday. So on my way over to sensei’s house, I dropped by a grocery store and bought a pretty white floral arrangement for Yuu-chan. Pleased with myself for selecting such a beautiful and considerate gift, I was all smiles at the register. The cashier gave me a puzzled look as I grinned at her.

It wasn’t long before I would realize why the cashier had looked so puzzled. When I showed up at sensei’s house, she and Rie-chan were there to greet me. I told them I had bought a gift for Yuu-chan, and they were excited to see it. I pulled the flowers out of my grocery bag and proudly displayed them to the two women.

Their expressions went from excitement to shock and horror. Then, seeing the pleased, sincere expression on my face, they burst out laughing.

“Jamey-san,” my teacher said, quite literally clutching her chest as she shook with laughter, “you bought Yuu-chan death flowers.”

Of course I didn’t know the Japanese word for death flowers, so I asked her what she meant.

“Death flowers,” she replied, “are what you give to someone when someone close to them has passed away. These flowers are to console someone after a death.”

Now I understood why they were laughing so hard. Here was this American boy, so pleased with himself for being flowers for Yuu-chan’s birthday, who had ignorantly selected the least appropriate gift possible. No wonder the cashier had looked at me oddly; she must have wondered why this American was so happy about someone dying. The gift was borderline offensive.

Fortunately, sensei and Rie-chan came to my rescue. They pulled out all the flowers (the white ones) that would insinuate death. They comprised pretty much the entire arrangement, so I was left with a few twigs and some greenery. But it looked nice. And Yuu-chan never knew the difference.

My advice for all your foreigners out there: If you’re buying flowers for someone in Japan, don’t buy white flowers. Go with any other color but white. Otherwise you might just be getting them death flowers.

This entry was posted on Tuesday, October 21st, 2008 at 8:50 pm and is filed under Japan. You can follow any responses to this entry through the RSS 2.0 feed.