As an adult, Halloween has not been a holiday that I particularly enjoy. This has to do with a key dichotomy between kid Halloweens and young adult Halloweens (there’s also married adult Halloweens, which will come later in life).

The purpose behind kid Halloweens is the pursuit of candy. Kids go through the whole rigamarole of costumes not because they love dressing up as Native Americans or robots or Japanese businessmen (not a joke; see October 31, 1993), but rather because they know at the end of the night, they’ll be in the possession of all the candy they could ever imagine.
As young adults of drinking age, the purpose of Halloween changes. No longer is candy important–we can purchase candy whenever we want. Rather, young adults enjoy Halloween because they get to look ridiculous for a night and blame alcohol for related lapses in judgment. Women dress provactively; men put just enough effort into their costumes so they can attend parties with said women.
At some point in recent history, men discovered that they can attract the attention of those women by dressing as women themselves. This is a Halloween tradition I have been witness to the last 10 years of my life, but I’ve never actually participated myself. In fact, in recent years I haven’t done all that much for Halloween. I don’t like putting a lot of effort or money into a costume that I’m only going to wear for one night.
For some reason, something changed this year, and I think it’s for one main reason: I decided to pursue the idea of a group costume. I gave the couples costume a try last year, and it was actually pretty fun. Why not expand that to a great group? So four of my male friends and I brainstormed a few ideas, and we came up with the idea of dressing up as Top Gun wingmen (note the double meaning of “wingmen”: supporting role for plane pilots, supporting friend when going out to bars).  I found some quality jumpsuits on the website of a commercial supplier, and we all sewed patches onto our outfits. And I have to say, after going out last Saturday and this past Friday, I had a great time with the group outfit. The full effect is lacking on this photograph, as it only includes Eric and I, but you get the general idea. Oh, and I also wore this to work on Friday. 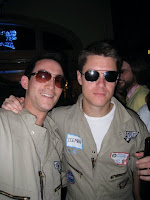 This entry was posted on Sunday, November 2nd, 2008 at 9:55 pm and is filed under Uncategorized. You can follow any responses to this entry through the RSS 2.0 feed.

3 Responses to “A Halloween Primer”