From the Mailbag: JoshVision: Question of the Day

Today I was going to try to field one of NQL’s many questions, but I realized that it was better answered by the answerer of all questions, JoshVision. Thus:

Answer: The term “bar” originated in the Prohibition era, a sad time in our history when it was illegal to serve or consume alcohol.  As Hollywood has taught us though, Prohibition was more of a guideline than an actual enforced law.  Many loopholes existed that allowed for the legal consumption of alcohol.  One of these such loopholes was that places could continue to serve alcohol as long as their patrons were, and I’m quoting directly from an early draft of the Eighteenth Amendment here, “…sober enough to balance on that there bar…”

So since these establishments did not want to risk being raided by hat wearing, stick wielding, whistle blowing policemen, they took advantage of this loophole wherever possible.  It thus became tradition that patrons were forced to balance themselves on top of a thin metal bar in order to be served alcohol.  When they could no longer keep their balance, they were cut off and politely thrown headfirst into the street.  Please see the artist’s rendering below: 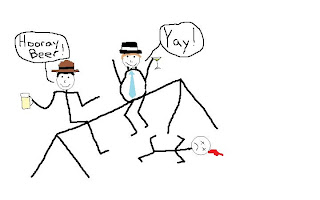 Since the drink servers had to keep a close eye on the bar to prevent head injuries and to quell the inevitable attempts at cheating, they became known as “bartenders.”

When Prohibition was lifted a few years later, the bar concept was abandoned but the name “bar” stuck.  Over the past few decades, the bar concept has evolved into the more traditional setting we know today, complete with long wooden table, stools, dart boards, and the creepy guy that sits in the corner staring at my girlfriend all night.

Knowing is half the battle!

This entry was posted on Monday, November 24th, 2008 at 10:09 pm and is filed under JoshVision, question of the day. You can follow any responses to this entry through the RSS 2.0 feed.

No Responses to “From the Mailbag: JoshVision: Question of the Day”