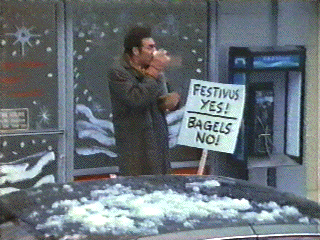 9. Your Mom [to which someone else incorrectly grieved, “People who can’t spell “you’re.”]

8. Michael Jordan and Scottie Pippen: For overshadowing Horace Grant during those championship years.

7. The abbreviation “Xmas” for Christmas.  How does “Christ” possibly equal X?!

Top 4 Festivus Grievances of 2006 (Feel free to grieve my indecisiveness, but I equally liked the following four grievances.)

The Lesser Antilles.  Why can’t you be more like the Greater Antilles?

Spinach—Thanks for crapping out on us this year and leaving us with nothing but arugula.

Pluto—not a planet? You let me down!

This entry was posted on Thursday, December 4th, 2008 at 11:21 pm and is filed under Festivus. You can follow any responses to this entry through the RSS 2.0 feed.

No Responses to “Top Festivus Grievances of 2006”