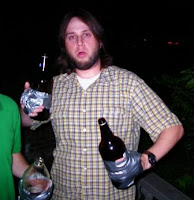 Today’s list is brought to you by Gabby, with the Top 10 appearing tomorrow.

20. Twitter–I don’t want to know what you’re doing right now.
19. The phrase, “The truth, the whole truth, and nothing but the truth.” Really, if we tell the whole truth and nothing but the truth, I think we’re covered. If we assuem a modest average of 10,000 witnesses saying this phrase every day with a 1 second time reduction for leaving out “the truth,” conservatively figured over 800 years, that’s almost 37 years of time we’d have saved the judicial system.
18. Bosses who can’t take a punch.
17.  Co-workers who forward “amusing” e-mails to you and then come right over to your desk to watch you read the e-mails.
16. A baker’s dozen…why do they get the one extra? I know the price is built in for that 13th bagel–don’t make yourself out to be so generous, baker.
15. The earth’s orbital path around the sun: Why so lopsided? A pleasant 70 degree temperature would be nice.
14. E-mail forwards that ask you to forward the message to 10 other people or else evil will befall you…and my dad for constantly sending them to me!
13. People who think I fake bake–it’s like they’ve never seen an Egyptian before.
12. Everyone becoming an economist overnight (i.e., Ben Bernacke) (to which Gabby added, “had no idea what this one meant, but I got this funny image of an economist going to a sleepover at a friend’s house).
11. That “breaking news” is now any news less than 24 hours old.

This entry was posted on Wednesday, December 10th, 2008 at 9:54 pm and is filed under Festivus, grievances. You can follow any responses to this entry through the RSS 2.0 feed.