A Surprise on the Amazing Race 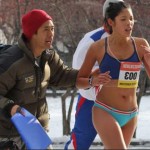 Back during my junior year abroad in Japan, we were starved for American television. Japanese game shows may seem cute and fun when you’re over here in the States, but when they’re the only thing on TV, a healthy does of Friends is the perfect medicine. So one day, a good friend of mine, Tammy, […]

I’m not a coffee drinker. Floofy coffee drinks I enjoy; frappacinos, mocha latte chills (thank you, Cinnabun), that sort of thing. But coffee–no thank you. Tastes like dirt. But it smells heavenly. If coffee tasted like it smelled, I’d drink it every day. But it doesn’t. So I’m left with this tantalizingly delicious smell and no […]

I Want to Go Where the Wild Things Are

I know, two movie posts in one day, unheard of…but I had to post this. The song that was chosen for the trailer (Wake Up by The Arcade Fire) for Where the Wild Things Are is pitch perfect. Nailed it. I have a feeling this is going to be a truly transporting movie–transporting to another […]

Alert reader Bob Z. sent me a link to this article this morning. The article focuses on the uproar over Facebook’s recent redesign; it points out that most people hated Facebook’s other two redesigns as well…at first. Two weeks after each redesign, people had adjusted from the change and used the site more than ever. […]

The Future of Telecommuting

Every once in a while an unknown movie comes along that nearly makes me burst with curiosity and wonder. Last year that movie was Let the Right One In. But that was based on early, extremely positive reviews (and they were correct). All I’ve seen of Sleep Dealer is a mediocre trailer and a brief […]

Phoning in from the Bathroom

You’ve had this happen to you. You’re on the phone with a significant other or friend. You’re talking, laughing, blah blah blah…and then you hear a toilet flush in the background. You have to ask. “We’re you…going to the bathroom?” “Uh, yeah.” Perhaps you’ve even been the perpetrator at times. The question is, is this […]

I think I’ve finally figured out Twitter. For myself, at least. I have an ongoing list of things I want to blog about. The list currently has hundreds of items, many of them not worth writing more than a sentence or two about. This list has been growing longer and longer. My new blog format […] 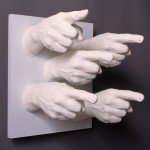 When you encounter a problem at the workplace, fingerpointing is a must. Point your finger at the solution, not the problem (or who caused the problem). You’ll double your chances of solving the problem quickly and effectively. A few years ago I walked past my boss’s office around 6:30 in the evening, after everyone else had […]

Fist Names on the Daily Show

I just noticed this morning that Jon Stewart named his fists on live television the other day. Sorry if anyone else wanted these fist names; Stewart has claimed them as his own. Stewart!

Cat Flips for the Flip

Thanks to an incredible deal on Woot! the other day, I have found myself the proud owner of the easiest-to-use video camera in the universe: the Flip Ultra. It’s so simple that it even has a built-in USB drive. So when you’re ready to upload the photos to your computer or YouTube, you just “flip” […]

I’m giving a new format a try for the weekend–please let me know what you think in the comment area below. Thanks! Note: Click around a little bit. I’ve made improvements to the general setup that I think work really well. I’m most curious about your response to the three-column theme on the main page, […]

I Survived Being Lost in the Rainforest: A Survivor’s True Tale of Survival Against All Odds 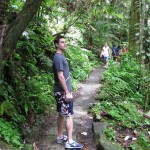 On Thursday, March 12, 2009, I strayed from the path of a Puerto Rican rainforest and became lost in the woods. Several hours later, I emerged from the woods emaciated, naked, and savaged by lice and dandruff. I am a survivor. This is my story. I had been staying at a resort in Puerto Rico […]

How to Deal with Unexpected Blogging Success

Three weeks ago, something odd started happening on my blog. My hits skyrocketed for no particular reason. Usually I average around 150 hits a day; I was tripling that. Thanks to WordPress, I could see what was drawing people to my blog. It was a photo of Salma Hayek. Right now if you search on […] 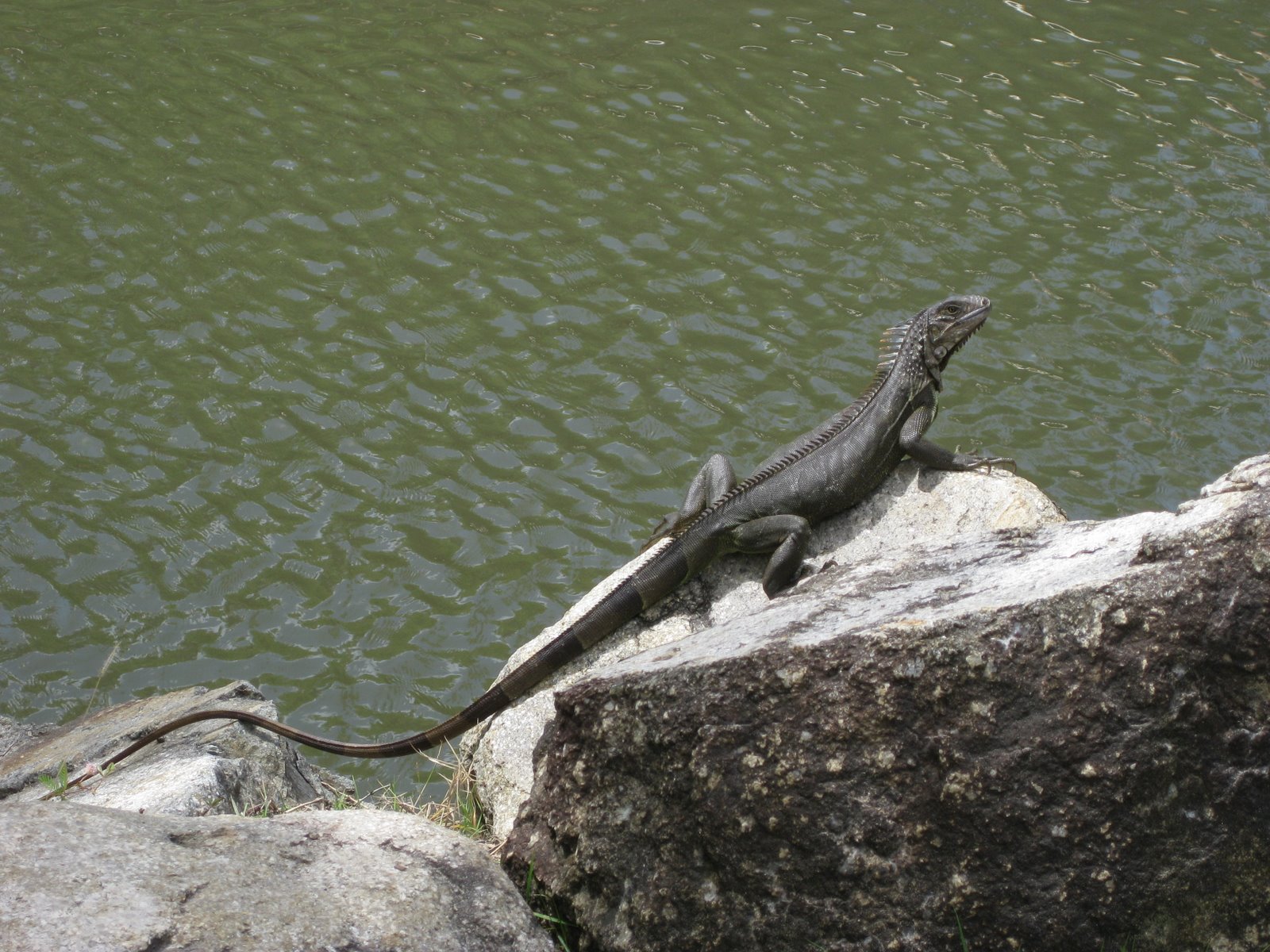 So I was going to post a survival entry about how to survive an iguana attack, but as I was writing it, I realized that most people probably don’t realize that iguanas are scared of people. You need to know that or you won’t get the joke. In fact, I was asked by a friend […]

WBC Yeah You Know Me

Puerto Rico lost to the U.S. 6-5 today in the World Baseball Classic. But last Wednesday, they were primed through a run through the international tournament after a 5-0 win against the Netherlands. I was at the game. The first round finale was played in San Juan at a fairly nice stadium that reminded me […]

The Best Bartender in the World

The best bartender in the world works in San Juan, Puerto Rico. His name is Thomas. He makes exactly three drinks a day, one of each of the following. Cuba Libre (rum and Coke): “Not Pepsi, not RC Cola, only Coke.” Daquiri (rum, lime juice, and sugar) Mojito (rum, lime juice, fresh spearmint, and sugar) […] 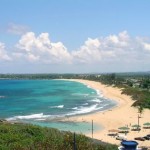 I had the pleasure of vacationing in Puerto Rico last week. I’ll have a few PR-themed blog entries this week, but I thought I’d start out with a general overview of some fun facts about Puerto Rico. It’s not a foreign country! That’s right, it’s a U.S. commonwealth, like Virginia, my home state. That means […]

How to Gain My Loyalty

I recently became loyal to two websites for the same reason, so I thought it worthy of sharing. The first is a site called Crap, I Missed It! The concept is something I wrote about in the blog a long time ago: a service that reminds you when your favorite band is coming out with […]

Recently I was on a flight (Continental) where a meal service was offered. For free. It was such a surprise, and it immediately improved my opinion of the airline. I was talking to Nancy about how rare it is to have such a service included with flights nowadays. Everything seems to be a bonus that […]

As a follow up to Adopting Me, an article about adoption I wrote for Crosswalk.com that has been widely read (3 weeks after publication, it’s still on the top 10 most popular list on the site), my birthmotherwrote about my adoption from her perspective in a piece published on the site today. This piece should […]

How to Get a Six-Pack in 30 Minutes

Particularly in today’s economy, most men neither have the time nor energy to go through the rigmarole of getting a six-pack. The endless hours spent doing situps could be spent watching Flight of the Conchords instead (hilarious this season!). Most quick and easy fixes are too good to be true. This is one of those […]

I get the vast majority of my news from the daily show, but occasionally I’ll hop on over to CNN.com to see what’s going on in the world. Often I’ll see articles with the little video camera icon next to their titles…at least, I’ll think they’re articles. But when I click on the link, all […]

The Four Questions to Determine Your Next Job

Ever since I started blogging on Brazen Careerist, a site that aggregates blogs by young professionals about careers, management, and life, I’ve been thinking a lot about my personal mission statement. At some point I’d like to write a personal thesis; a manifesto, if you will. But right now I really just need to be […] 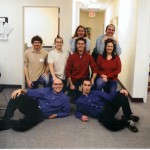 Three years ago at the publishing project management company I used to work for, my coworkers and I were enjoying lunch together in the meeting room (it was a small office). Halfway through my sandwich, I looked over at my coworker, Tracy, and realized that she and I were wearing similar outfits. “Hey, we match,” […]