The Seven Best Cities in the World for Writers

(Note: The original list was for five cities, but the list has grown thanks to alert readers. If you have a city to add and the data to back it up, let me know. Also, I’m connected to an independent publishing company called Blank Slate Press, so if you’re a novelist or a reader of novels, check out the site.)

If you wanted to forgo your regular income for a few months and move somewhere in the world just to write, where should you go?

Not that I’m going to do that, but it’s a question I’ve been playing around with for a while. Today I decided to find the answer.

I did a fair amount of online research to find these cities and then rank them, but I’m sure I’ve missed someplace important. I didn’t even consider places like New York or London; even though they’re hotbeds for writers and artists, it’s not cost effective to live there. Plus, there are so many distractions, and way too many novels written about living in New York and London.

I found the cities on this list by looking at places that had established writing communities (even though writing is mostly a solitary task, commiserating with other writers can be motivating), reading/writing festivals and conferences, great settings/environments for writing, and low costs of living (key if you’re surviving off savings for a while).

Recommended by alert reader Jennifer G-T, South Queensferry is the ideal place to settle down and write not because the weather is good, but rather because it’s quite bad. This makes the city ” a perfect place to sit in pubs and talk about writing, or sit in your room and write.” I’m sold.

Annual Festival or Conference: no

Hay-on-Wye is a tiny town tucked away in the foothills of Wales that just happens to have the largest number of book stores per capita in the world. I spent a few days in Hay a couple years ago, and the setting couldn’t be better for reading and writing. The only downside is the cost to get there and live there–even though it’s a tiny town, the rent ain’t cheap thanks to the attention it’s gotten from the annual literary Hay Festival.

Cartagena caught my eye because it hosts the South American version of the Hay Festival every year. As it turns out, it’s extremely cheap to live in Cartagena–food and rent are half what they are over here. And according to what I read, it’s not unsafe to live there. The only big downside is that it’s a big city with no established writing community (or many English speakers), so you’ll have to live the solitary writer’s life down there.

Famous Authors: Gabriel Garcia Marquez based the city in Love in the Time of Cholera on Cartagena

It’s a little chilly up north, but the spirit of writing keeps people warm. Writers seem to gravitate to this small, liberal town (one I overlooked in the original ranking). With Smith College in town and several other colleges in the area, the excitement of academia rubs off on those trying to create works of genius.

Annual Festival or Conference: no

You wouldn’t think St. Louis would be a hotbed for writers, but with the support of the St. Louis Writers Guild, there’s actually a strong network of writers in the Gateway City. Rent is cheap, the weather’s relatively mild, and the various scenery–ranging from the people watching you can do from Coffee Cartel to the beautiful Forest Park–is perfect for writing or journaling.

There’s something about southern architecture that makes you want to write. Oxford–no, not that Oxford, which would be way too expensive to live in–is an inexpensive town that has branded itself in recent years as a place for all things literary.

Annual Festival or Conference: Oxford Conference for the Book 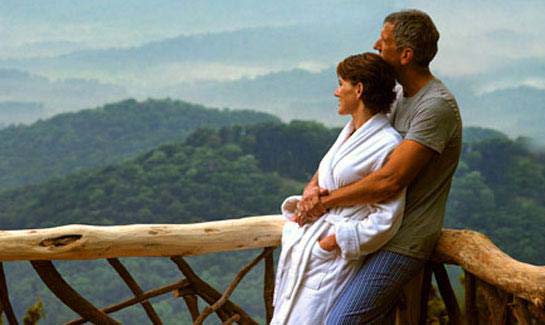 Asheville beat out the competition by its reputation as an artist town, the beautiful setting, and the low cost of living. For such a small place, it seems to pump out and attract major authors. This is the number one place to settle down for a few months and spend 8 hours a day putting pen to paper.

This entry was posted on Sunday, April 12th, 2009 at 10:43 pm and is filed under St. Louis, travel, writing. You can follow any responses to this entry through the RSS 2.0 feed.