Are Writers More Likely to Get Migraines?

Lately on Twitter I’ve noticed a lot of people talking about their migraine headaches. I’ve been getting a lot of headaches lately too. Today it dawned on me…these people are all writers. Every one of them.

Is this a coincidence, or are creative people more likely to get migraines?

I’ve been getting migraines since I was a little kid. They happened the most frequently when I was in middle school, I think. Several times I had to go home from school. Other times I endured until the end of the day, feeling every bump on the school bus shatter my mind, until I could stagger to my room, close the blinds, and try to sleep while my mother covered my forehead with her hand (when I think of the great acts of my mother, that is number one on the list). 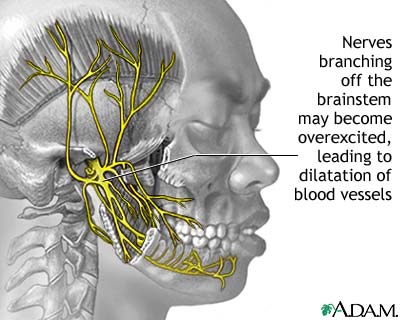 I used to think that sunlight caused the headaches. Later I realized it was combinations of various factors like too much sodium, too little sleep, not enough protein, irregular meals, and dehydration that caused the migraines. I closely monitor those factors now to prevent the headaches from happening regularly, but they still occur on occasion. Lately they have been a problem.

But is there a connection to writers? Are migraines more likely to occur in creative minds? Or in some warped way, do migraines cause creativity?

I will say this: One of the most profound epiphanies I’ve ever had came during one of my worst migraines. It was during my second summer in Hiroshima in high school, and my host family decided to drive up to the mountains to have tea and take a hike. I couldn’t say no to the trip, but as we drove, my headache got worse and worse until I dreaded every bend in the road.

It was then that I started to experience what I can only describe as an opening of my mind, an outpouring of thoughts. Maybe it was caused by the headache, maybe by the lush green surroundings; whatever the cause, my mind opened up in a way that I had never experienced.

This is going to sound crazy, but as I was driven through the mountains, my mind figured out the meaning of life. It was not 42. It was much more complicated than that. I let go of my mind–I stopped trying to control my thoughts, and I just let them wander, as they seemed to want to find the answer to the question of why we are here.

When we reached our destination, I came to my senses. My headache was completely gone. It was the weirdest feeling. I felt like a new man.

When I got home that night, I wrote down everything. Unfortunately, those papers are long gone, so I have no great enlightenment to share with you today. It had something to do from making mistakes, learning from them, sharing them with others…and then something big that followed that process that really gave meaning to life. Oh well.

It just makes me wonder the sheer amount of brilliance you could generate if you induced headaches among a dozen people and had them meditate in a room for an hour. I bet the readings on that room would be really weird.

What do you fellow writers think? Do you get migraines? How do they affect your life? I know many of you have them way worse than I do.

This entry was posted on Thursday, February 25th, 2010 at 12:13 am and is filed under Japan, personal and tagged with personal. You can follow any responses to this entry through the RSS 2.0 feed.

35 Responses to “Are Writers More Likely to Get Migraines?”