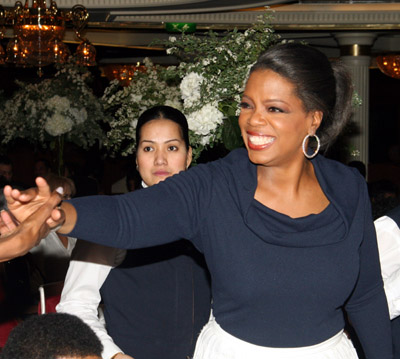 Traditionally, Catholics give up something for Lent. I work at a Newman Center, so I’m privy to the various sacrifices people make. Most involve something like candy; something that’s somewhat hard to give up and that can be gorged on as soon as Lent is over.

My personal take on Lent is that I like to use it as a time to adapt a behavior that will improve my life and the lives of those around me. Ideally, I learn that behavior over the 47 days of Lent and keep it afterwards (i.e., one year back in college I took up flossing and have stuck with it ever since). I’m doing a few things this year, but the one that’s related to Oprah is that I’m giving up looking at my phone while my car is in motion.

This goes beyond texting while driving (which I rarely do anyway). It also means that I don’t read texts while I’m driving or–here’s the biggie–select a contact to call while the car is moving.

You may think that’s barely a distraction at all. But give it a test run. Try to find a contact while your car is moving. You just took your eyes off the road for a few seconds, didn’t you? (Not to mention the fact that you’re reading this blog while driving.) It’s deceptively dangerous. And I want to stop doing it.

I’m also pledging to stop looking at women as I drive. It’s a bigger problem that you’d think. Do you know what women wear when they jog?! Even in the winter! It’s fantastic.

I saw a woman texting for a good two miles on the road today. Eventually I just let her pass me. Oprah’s big campaign lately is to get people to stop texting while driving. That’s great. The problem is, her solution for it is to tell women to put their phones on their back seat so they don’t even have the option of texting while driving.

This is my Lenten choice; I don’t mean to impose it upon you. But maybe think about it today when you’re driving. If you think I have a point, text me when you get to a stoplight.

This entry was posted on Wednesday, February 24th, 2010 at 12:30 am and is filed under personal and tagged with confessions, personal. You can follow any responses to this entry through the RSS 2.0 feed.