A Different Type of Love

Growing up, I had very little contact with domesticated animals. My mother was really allergic to cats and dogs, so we had a few gerbils, but that was it.

I’d encounter dogs every now and then, but I didn’t understand what they wanted from me with their sniffing and licking and growling. I had very little contact with cats.

So when I started dating C. in 2005, I was introduced to my first cat. Catface was a beautiful, prissy cat who liked to play mind games with humans. It was hard not to like Catface, even though she wasn’t exactly friendly.

When C. moved in with me, we decided to do something together: We went to the human society to get a kitten. This was a huge step for me, as I never thought I’d own a pet, much less actively try to find a pet. But I think my affection for new creatures was growing. 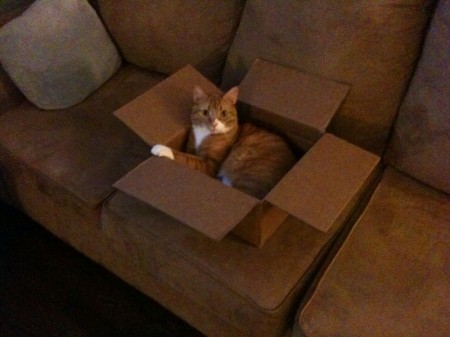 If I remember correctly, there were a few kittens at the human society that fateful day, but we thought the ginger tabby looked the cutest. We sat down in the room with the little guy, who promptly extended his claws, walked up my arm, and across my shoulders, nuzzling against the back of my neck.

He was the one.

In those early days, Biddy (rather, he was named Baby Bok Choy back then) would sleep on my chest or between C. and me. He considered us his parents, I like to think.

As much as I loved him from day one, I wasn’t the perfect father. This little guy has drawn my ire quite a few times. The time that stands out from the rest was when I settled down with a hot dog one Saturday afternoon. I got up to get something to drink, and within a few seconds, Biddy had dragged the hot dog from its bun onto the floor.

I overreacted. I grabbed Biddy by the scruff of the neck and slid him across the room, way too forcefully. I look back and cringe at what could have happened to him had he hit the wall at the wrong angle. C. was terrified and scared, and we ended up hugging it out, both of us crying. I realized that even in anger, I needed to connect to some element of compassion and tenderness–not just with Biddy, but with everyone.

When C. and I broke up, she offered me Biddy, saying, “He likes you more.” I don’t know about that, but it was good to hear, and I came to enjoy having Biddy as the only creature to greet me when I came home. He would take me around the condo and show me things–the leaves on the balcony, the ball he pushed too far under the sofa, his food and water bowls. We’d play and cuddle and wrestle, and I’d give him a few bites of my human food at dinner. He became a companion of sorts.

One of the worst things I’ve had to do was give Biddy up for a few months while I lived in a different apartment and rented out my condo. The man who took care of him owned a number of cats, and although he loved them, he wasn’t the best at feeding them. I visited Biddy the first week, but it was so hard to bare that I didn’t see him again for another month and a half. When I saw him again, he came scampering to the door–somehow he remembered me. I could barely recognize him, though. In just under two months, he had lost at least four pounds. I was shocked and scared, and it took every fiber in my being to not scoop him up and take him away that day. Fortunately, my friends Jay and Erin were able to take him in two days later, and I moved back into my condo with Biddy later that week.

Now it’s just me and him. Two bachelors enjoying the good life.

I know it’s a little weird for a 29-year-old man to care about his cat and talk about him the way I do, but I wanted to share this journey with you for a reason. I grew up without a place in my heart for animals. I almost scorned the very idea of owning a pet, like that was something people did if they weren’t able to connect with other people.

Boy was I wrong. I feel like there is so much more love in me because of Biddy. Because of him, I’ve learned things about compassion, tenderness, unconditional love, and dependency that I otherwise never would have known. He’s a good cat, an affectionate cat, a playful cat. He’s my boy.

Having Biddy reminds me on a daily basis that I’m capable of loving another being as much as I love myself.

This one’s to you, Biddy. Happy third birthday. May we share many more together.

This entry was posted on Tuesday, March 9th, 2010 at 10:34 pm and is filed under personal and tagged with personal. You can follow any responses to this entry through the RSS 2.0 feed.

13 Responses to “A Different Type of Love”