This greatest fear is pretty similar to Greatest Fear #2, opening canisters of Pillsbury dinner rolls. But this one is timely.

On April Fool’s Day, I came into my office to find a sign on the bathroom in my office that said it was out of order. I also found a big box on my chair that said, “In case you need to use the bathroom.”

“Cute,” I thought, and opened my desk drawer.

It was filled to the brim with styrofoam peanuts.

Then I opened another desk drawer. Then another. Then my filing cabinet. Then my boxes of instant oatmeal (my daily breakfast). Everything was filled with styrofoam peanuts. I was delighted. Very clever.

Then I opened the bathroom door and found this: 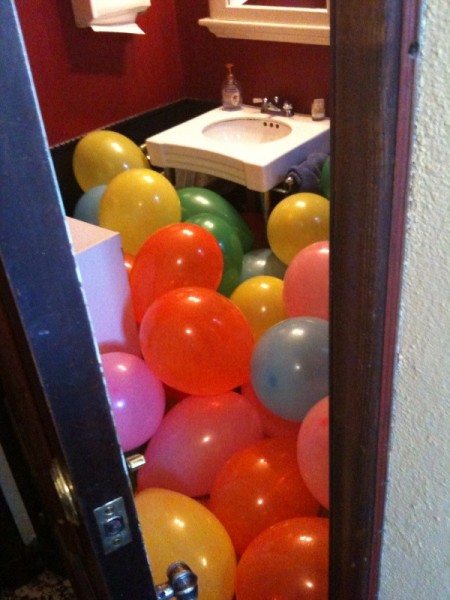 Brilliant. I laughed out loud. I loved it!

I wasn’t sure what the big box on my chair was for, so I put it aside and went about my day.

After a while, the interns creeped into my office with grins on their faces. “Did you open the box?” they asked? “Open it!”

A pin. For popping the balloons.

Very, very clever. Really awesome. Except for one thing…I really don’t like popping balloons. I’ve always been like that. I’m skittish around loud noises. As a kid, I really didn’t like fireworks (I’m still not a big fan, but they are really beautiful too). In relationships, I don’t shout and I don’t like to be yelled at. I like to play music in my car at a pretty low level, even when I’m alone in the car. It’s just how I am.

Fortunately, when the interns cleaned up all the styrofoam peanuts, one of them volunteered to pop all the balloons. We closed the door behind him. It sounded like there was a machine gun in there!

How did I get the interns for April Fool’s Day? You’ll have to wait until tomorrow. 🙂

This entry was posted on Sunday, April 4th, 2010 at 7:51 pm and is filed under April Fools, superlatives and tagged with superlatives. You can follow any responses to this entry through the RSS 2.0 feed.