I don’t know how to tell this story the best way. I’ll tell it the only way I know how. Also, I feel like I’ve told it on the blog before, but I searched for it and couldn’t find it, so here it is.

I’ve told a few stories on this blog about the time I spent in Japan my junior year of college. During fall break of my first semester in Kyoto, two friends and I decided to bike around the largest lake in Japan, Lake Biwa. Why? Because we’re guys. We point at stuff and decide to climb it, swim it, lift it, and dig through it.

After our second or third day, we stopped at a traditional Japanese style inn. Before the infamous nap story that I’m about to tell you happened, there was one other funny side story. Because this was a traditional inn, they had traditional Japanese-style toilets, which are holes in the ground. Fancy holes, but holes no less. I had used such toilets before, but only because I had some sort of a grip or handhold. Not in this bathroom. The pants I was wearing didn’t allow me to spread my legs far enough to maintain my balance, so after a few minutes of struggling, I simply took them off and hung them over the bathroom stall.

I was in the middle of transitioning my bowels when one of my friends walked into the bathroom, saw the pants hanging from the stall, and turned around and walked right back out. (This is much funnier if you can see this story through his eyes.)

Traditional Japanese inns also have jacuzzis. They’re called something special in Japanese, but they’re really just jacuzzis. This was perfect after a long day of biking. However, after about 10 minutes of those bubbling waters, I’d had my fill. I excused myself and went back to the room.

After I changed, I realized how exhausted I was. I really wanted to lay down. So I slid open the closet to pull out a futon pad (like an American futon pad, but they’re thinner and they fold up in Japan), but then I stopped. There was something about this closet that made it seem like the perfect spot for a nap. There were several futon pads stacked upon one another, and it was this cool, dark place…it just seemed really cozy, like one of those pillow forts I made as a kid.

I climbed in, slid the door shut, and was out like a light. 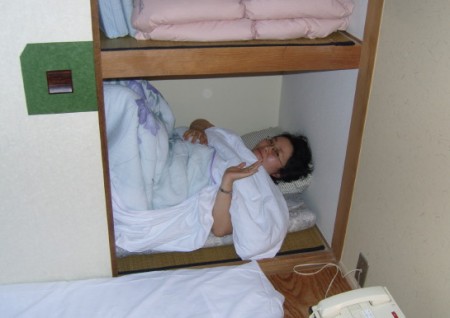 This isn't me, but this is a pretty good visual of what the futon closet looked like.

Maybe an hour later, I was awakened by some voices in the room.

“They’re going to serve dinner in a few minutes.”

My two friends were back in the room, and they had no idea where I was. So I calmly slid open the door and rolled out of the closet.

You can imagine their reaction. It’s not often someone rolls out of your closet at a traditional Japanese inn.

I have no idea why I thought of this story today, but of all times to think of it, it was in the middle of a staff meeting. We were talking about something really serious, and I’m sure I had a huge smile on my face thinking about this nap story. So I had to share it with you. Enjoy.

This entry was posted on Tuesday, April 13th, 2010 at 8:58 pm and is filed under humor, Japan and tagged with humor. You can follow any responses to this entry through the RSS 2.0 feed.

2 Responses to “The Nap Story”