As long as I can remember, my grandma has lived in the same house. I ate many a pot roast in that house, and tossed many a Andes mint wrapper behind my grandma’s TV (I later learned that she knew I ate her candies but never said a word to my mother…such a good grandma).

There was one thing in my grandma’s house that scared the hell out of me…literally. In Grandma’s living room, right behind the couch, perched this painting: 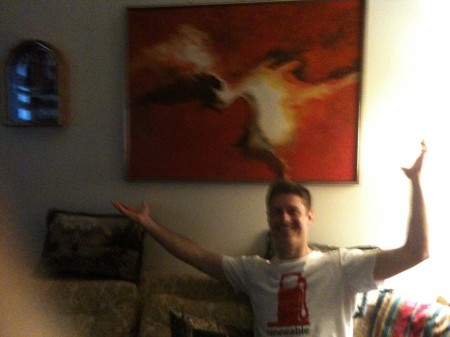 Extra points to Grandma for taking this photo with my iPhone

As a child, I believed that if I looked at that painting for any longer than a passing glimpse, I would get sucked into the fiery belly of Hell. Capital “H”.

That painting came to my attention when I was dropping off Grandma this past weekend. The conversation went something like this:

Grandma: Remember that painting? The one you were always scared of?

Me: Yeah, the one that tried to kill me?

Grandma: That’s the one. Aunt Dot recently turned it 90 degrees because she thought it would look better.

Me: Is it still a portal to Hell?

Grandma: Of course. It works really well above my new couch.

I thought that maybe the new angle would make the painting look less like Hell, but no, it still does. And I’m not saying that it’s an unattractive painting. Objectively it’s quite nice. Call me old fashioned, but I prefer paintings that don’t feed my soul to lava demons. That’s where I draw the line with fine art.

I’m sure everyone has something in their grandparent’s house that scares them a little (in my other grandparents’ house it was a cuckoo clock). What’s yours?

This entry was posted on Tuesday, June 8th, 2010 at 9:45 pm and is filed under superlatives and tagged with superlatives. You can follow any responses to this entry through the RSS 2.0 feed.