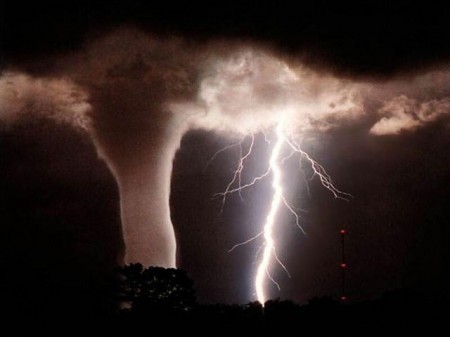 I feel like this photo is missing a third natural disaster, like a tsunami or Lindsay Lohan.

The other day, a friend of mine needed to drop off some beer at my place on his way home. I walked outside as he pulled up in his car, realized that there was a tremendous storm happening, and sprinted the rest of the way until I was safe inside.

Was it the rain that spooked me? The dark? Nope. I am petrified of getting struck by lightning.

Now, I’m sure this isn’t an uncommon fear. If you’re not scared of getting struck by lightning, you’re probably in the minority.

But here’s the thing: I actively avoid lightning. I go out of my way not to touch metal or to ground myself. I dash from my car as if I can outrun it. I’ve even hit the ground when I thought I felt my hair stand on end. I’ve purposely not opened an umbrella to avoid lightning. I’ve scouted out the tallest objects in the area and moved away from them.

Lightning is the number one reason I haven’t taken up golf.

However, I have figured out a little mental trick to help myself with this fear. Whenever I find myself in a situation where I’ll probably get struck by lightning, I tell myself, “Maybe you’ll get superpowers.”

I mean, if anything’s going to give me superpowers, it’s going to be lightning. Why wouldn’t it? It’s scientific.

Are you afraid of lightning? What lengths do you go through to avoid this calamity?

Daily Quickie: I recently changed my iPhone’s ringtone to the original Mario Bros theme. I could not be happier every time my phone rings.

This entry was posted on Thursday, July 22nd, 2010 at 8:35 pm and is filed under My Greatest Fear, superlatives and tagged with superlatives. You can follow any responses to this entry through the RSS 2.0 feed.