I’m getting a little tired of love triangles in fiction.

I don’t mean to offend anyone. I probably have dozens of love triangles in my own stories and I don’t even realize it. My concern is that they seem to be everywhere now, not because they’re realistic or even make for good fiction, but simply because everyone else is doing it.

What triggered this? I just read a description for a new YA novel that seemed pretty cool…until I reached the paragraph about how the main female character would be faced with a choice between a bad boy with a kind heart and a good boy with unknown motives. Immediately I had no interest in reading the book. 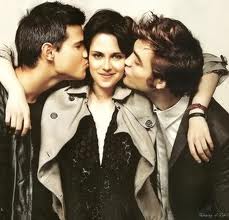 There are many books–especially in YA (young adult) genre fiction–that include this same love triangle. Twilight. The Hunger Games. A dozen other novels I’ve read about but haven’t made it big yet.

Maybe part of it is that there always seems to be a bad boy and a good boy. First, is that realistic? Do all women have this choice when making a decision about love? I’d think the choice would be more between a boy (good or bad) and lots of boys. Or no boy at all. Not two boys with polar-opposite personalities.

While we’re at it, why don’t we see more male-female-female love triangles? Are they somehow less compelling?

I’m trying to think of a point in my life when I struggled between two females. I can literally only think of one time, a random party where two girls were taking turns hitting on me (it was surreal but flattering). Every other time I’ve struggled with love, it’s been a choice between the woman I’m with and some hypothetical, unknown woman that I wonder if I should be with. Or between the woman I’m with and no one at all. Or many women.

Why do we keep seeing this device in fiction?

Daily Quickie: I reached 4,000 comments on my blog today (if you’re curious, the 4,000th comment is an amusing aside on my Puerto Rico post by someone named Al Lopez). I love for this blog to be a place for conversation, so I’m immensely happy that it’s garnered so many comments. Thanks for being a part of the conversation.

This entry was posted on Tuesday, August 31st, 2010 at 10:26 pm and is filed under books and tagged with writing. You can follow any responses to this entry through the RSS 2.0 feed.

17 Responses to “Tired of Love Triangles”