ST. LOUIS, Missouri  (AP) – Registered feline voters appeared in droves to vote against the controversial Proposition B, which, if passed, would have imposed strict, pro-dog  guidelines upon in-state breeders.

“The more dogs locked up in constricting 2 x 4 containers, the better,” said Cat Alliance spokesperson Mittens McWhiskers, referring to the clause that would ban breeders from having more than 5o breeding dogs at a time. 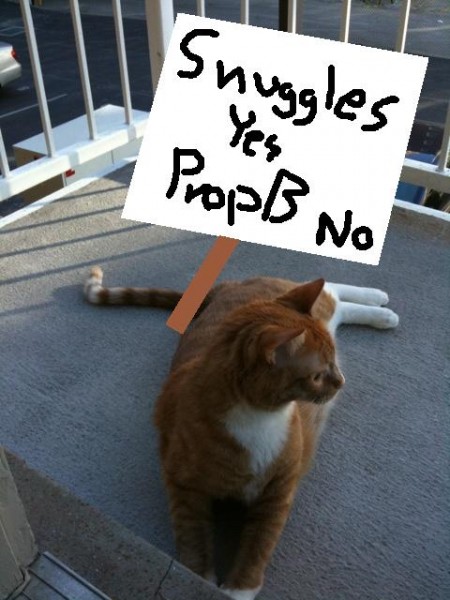 McWhiskers is one of nearly 43,000 cats that showed up on election day to exercise their right to vote on pet-related referendums. Cat Alliance and other anti-puppy groups held rallies across the state, focusing on hotly-contested areas like Johnson County and New Madrid County.

Sporting homemade signs emblazoned with slogans like, “Prop B, Not for Me!” and “Daily Access to Food and Potable Water Are Luxuries We Can’t Afford, Neither Meow Nor Later!”, cats marched up and down the streets in front of voting booths.

“Why should these pampered dogs get ‘unfettered access’ to outdoor exercise areas?” asked Kissy Poo, a Siamese mix from Chesterfield. “I don’t get unfettered access–we’re talking about a civil rights issue here.”

With over 1,455 commercial breeders in Missouri, by far the most in any state, the passing of Proposition B could have set a snowball in motion that would eventually make puppy meals across the country considerably more humane. But thanks to cat voters like Snowball in South St. Louis, Prop B failed to pass.

“You have to consider the impact this would have on the local economy,” he said, rubbing his scent onto a doorframe. “If breeders can’t stack cages three, four levels high, how are they supposed to generate the output necessary to keep small towns running?”

“Meth production can’t support them all,” he added.

The last time this many cats voted in Missouri was the controversial farm-raised tuna amendment in 1992.

This entry was posted on Tuesday, November 2nd, 2010 at 9:52 pm and is filed under Uncategorized and tagged with humor. You can follow any responses to this entry through the RSS 2.0 feed.