The Giver: A Play Review

When I was younger, I loved Lois Lowry’s book The Giver. It was actually read to me–and the rest of my class–by my 6th grade English teacher, and then I read it again on my own (words take a different shape when you see them on the page with your own eyes). And then I met Lois Lowry and had her sign the book. So when my friend Ariel asked if I’d post a play review of The Giver on my blog, I assured her that I had a place for it. I can actually see this working really well in play form. Here is Ariel’s review. 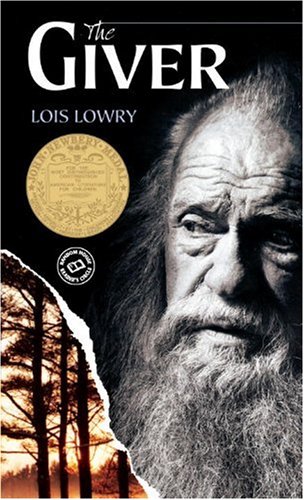 “Attention, please.” The controlled yet peaceful voice of a completely un-identifiable woman welcomes us into the dystopian world of sameness created by Lois Lowry in her book The Giver. While playwright Eric Coble has tightly adhered to the original text, this particular production by Metro Theater Company, now playing at the Edison Theatre, is anything but the same.  Even the gray, simple set designed by Dunsi Dai – required for a world with no color – is made visually more appealing through texture and movement.  The extra layers created by Rusty Wandall’s sound design (such as table noises for actors eating a meal with no dishes on-stage in the very first scene) and the live musical additions of percussionist Lance Garger add subtle colors. These auditory accents, accompanied by poignant uses of color, grow throughout the performance.  In fact, the greatest strength of the production is its ability to give the gift of first discovery to the audience. Jonas’ naïveté is so believably portrayed (alternatively with each performance by Christian Probst and Mitchell List) the audience discovers the color red as if for the first time as the apple changes color – with a ripple of notes – in mid air. Similarly, as Jonas learns about war and love, we too re-learn the foundational nature of these concepts.

Jonas’ family unit – mother, father and sister – work perfectly as a team to balance the dystopian ideals of routine, absolutes, and precise language without seeming dis-genuine.  There is a hint of playfulness in their interactions, such as when sister Lily (played alternately by Sarah Koo and Sydney Dorton) uses two stuffed animals to act out an imagined conversation, and the mother and father laugh with her. Yet barely a moment later, David Wassilak as Father calmly discusses how he will release, meaning kill, a baby the next day.

Set on the opposite side of the stage, the home of the Giver contrasts sharply with the family’s home – down to the bookcase where books become more and more colorful as Jonas completes his training. During his sessions with the Giver, Jonas receives memories, and here the uniqueness of Metro Theater Company’s performance really shines. Each memory is accompanied by a dash of color, a mix of recorded and live sound, and an evocative choreography from Beckah Reed. For example, when Jonas learns of the elephant, the audience sees the stage transform into an African jungle through another of John Wylie’s creative light designs, hears Jonas experience an elephant’s trumpet backed by a percussion-based injection of adrenaline, and watches as Jonas creates a memory of a moving elephant composed of the same actors who play his family. Thus, each new memory that Jonas forms is built from the components of his own true memories – his family and community. Even more impressive, these memories are intertwined into Jonas’ experiences in the community. For example, when his friends play a game of “war,” the lighting and sound which accompanied Jonas’ first experience of the memory of war overlay the otherwise benign scene.

It is a credit to Carol North’s direction and the visionary abilities of the cast and crew at Metro Theater Company that this production of The Giver is one of a kind.  Although the show is only playing through January 23rd at Edison Theatre, Metro Theater Company’s commitment to community interaction and integrated partnerships with the St. Louis community means students and families can experience the themes of The Giver at the Mildred Lane Kemper Museum, the Missouri History Museum, the St. Louis County Library, the Saint Louis Science Center, the Saint Louis Art Museum, and the Missouri Botanical Garden.

This entry was posted on Friday, January 14th, 2011 at 10:21 pm and is filed under books and tagged with entertainment. You can follow any responses to this entry through the RSS 2.0 feed.

3 Responses to “The Giver: A Play Review”