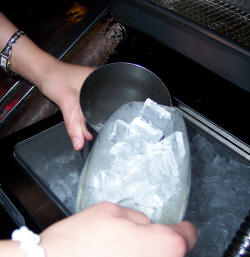 There’s something you should know about ordering drinks with ice at restaurants (that includes you, Liz Lemon, drinker of white wine Sprite spritzers on ice):

True story. You see, when you send a waiter to fetch you a glass of water (especially if you say it as I do: “Waiter, fetch me a water!”), what he should do is use the stainless steel ice scooper to place ice in your glass.

But what he actually does is uses your fresh glass as a scoop. Which isn’t a problem 99% of the time. But every once in a while, a glass will get chipped as it clashed against the ice. That little bit of glass gets scooped up by another waiter, and before you know it, you have a patron who is bleeding internally due to their diet coke.

Like I said, this rarely happens. It’s much more of a concern when a glass shatters in the ice, but a good restaurant will flush out the ice bin when that happens.

However, knowing what I know about scooping ice–after all, I was one such waiter who used the glass as a scoop–every once in a while I take a sip of my drink, and a little sliver of something shoots down my throat. It’s probably just a shard of ice. But you never know…

Also, never eat potato skins at restaurants. The outside of a potato is fair game for handling in the kitchen. Any given potato has probably passed through at least a dozen hands (many of them longshoremen) by the time it gets to your plate.

This entry was posted on Monday, February 21st, 2011 at 10:45 pm and is filed under My Greatest Fear, superlatives and tagged with superlatives. You can follow any responses to this entry through the RSS 2.0 feed.

5 Responses to “My Greatest Fear #19: Broken Glass in Restaurants”