The Paradox of Invitations 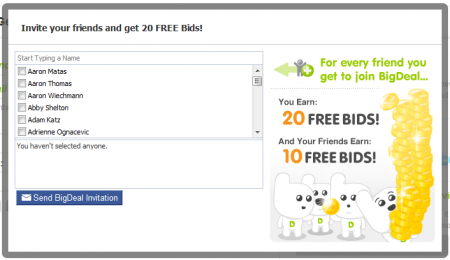 Lately I’ve been intrigued by the idea of website and web app invitations. You join a website and then gain some benefit (as does the site) by inviting a bunch of your friends. A lot of these invitation widgets access your e-mail, Facebook, or LinkedIn accounts. You click “permission to access gmail,” and all of a sudden you’re presented with a list of 300 e-mail address from which to choose.

I don’t know about you, but at that point, unless the incentive for getting a friend to join is really good or if I have someone specific in mind, I just skip the invitations. It’s the paradox of choice: I’m simply overwhelmed by the sheer number of Facebook friends or e-mail addresses from which to choose, and so I choose none.

I’m wondering if there’s a better way for a website to suggest invites to a new user. Thus I propose the following experiment:

The invitations would read as follows: “Hey! I just signed up for this fascinating new site. I have the one-time option of inviting exactly 10 of my friends and colleagues, and I chose you. Check it out if you have a minute.” (Where the number “10” matches Scenario 2.)

My hypothesis is that Scenario 4 will result in the most invitations per new user because the assigned context makes it easy for our minds to jump to specific faces and names without much thought. However, I would propose that it will be a much closer contest between scenarios 3 and 4 for the number of invite signups per new user. Scenario 4 is somewhat flattering and will target people who generally trust your taste, but Scenario 3 is flattering in a different way: The quantifiable number in the invitation makes people feel like they’re in a very limited, exclusive, elite group (or maybe they’ll feel like they’re the people to whom you pass on annoying website invites, I don’t know).

I wish I could run this experiment on my blog, but I think it would be more effective if tried on a much heavier trafficked website. Thus I’ve proposed the experiment to behavioral economist Dan Ariely (isn’t it cool that we live in a world where you can propose an idea to a bestselling author and he’ll actually read it? Perhaps even the next day?) [UPDATE: I heard back from Dan, and he’s going to keep an eye out for sites to try this method, but if you know anyone who runs a popular website with whom we could try this little experiment, contact me at jamey.stegmaier@gmail.com.]

This entry was posted on Wednesday, February 2nd, 2011 at 10:44 pm and is filed under behavioral economics. You can follow any responses to this entry through the RSS 2.0 feed.

8 Responses to “The Paradox of Invitations”