Ben Is the Cutest Creature Alive! (Out of 27 Contestants)

We have a winner.

Dominating the finale with 104 votes to Llewelyn’s 69, Ben has won the first-ever Tournament of Cuteness. Congratulations to Ben! 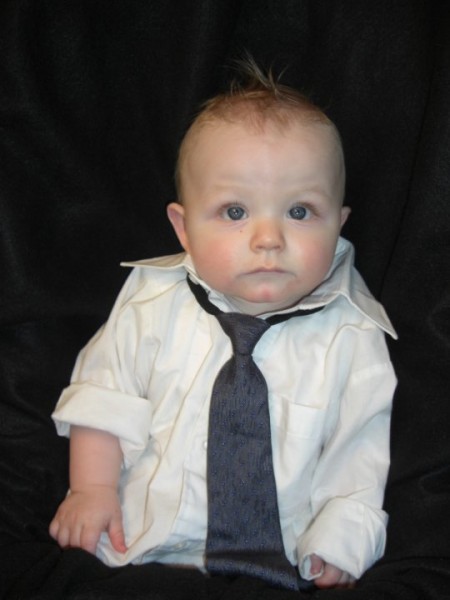 So in the end, a baby beats all the cute cats and dogs. I’m not sure if there’s a lesson in that. If Llewelyn would have dressed up in a rumpled tie and dress shirt, would he have won? Did Ben just have more friends than everyone else?

If anything, we can conclude that there are a lot of cute creatures out there. It’s been a pleasure hosting the tournament on the blog, and I hope you had as much fun as I did. It’s something I might explore in the future–in fact, I already have 5 submissions for a future Tournament of Cuteness. If you think your baby/pet has the stuff, e-mail him/her/it to me whenever you’d like, and I’ll keep the photo on file for a future contest. jamey.stegmaier@gmail.com

For now, in honor of Ben, avid reader and best friend Trev, who doesn’t know Ben at all has written the Legend of Ben, or:

The year was 1980, and both Virgil (before he was the E-Trade baby) and Ben were roadies working setup Air Supply. At the time they were inseparable, but one fateful night at Madison Square Garden would change all that.

Air Supply had just finished the night with “All Out of Love,” and the usual stream of hot groupies were waiting backstage. The party started. The drinks were flowing, and Ben gets that drunken, half-asleep look on his face that’s now become a permanent fixture—that look that had led him to bungee jump from 170-foot bridge in Nevada, run headlong at an angry bull, and get a giant tattoo across his back that read, “Crazy Boy”.

Anyway, Ben gets “that look” and starts spouting off drunken ideas. He leans over to Virgil and whispers something with a huge grin on his face. No one really knows what set him off, but Virgil, also quite intoxicated, stumbles to his feet and slaps Ben. Ben too jumps up, his face burning with the fire of a thousand suns. The two diminutive drunkards wrestle around on the floor, smashing a guitar before being literally booted from the building, guitar picks flying everywhere…

Michael Jackson happened to be behind the Garden that night, and he caught sight of the two babies brawling. Virgil whipped a guitar pick from his hair and waved it in the air with a drunken wildness; Ben stumbled around Virgil from side to side, and suddenly a light bulb went on in Michael’s head. Thus the Beat It video is born.

Virgil passed out in the alley, and Ben stumbled back inside for a few more shots of Goldschlager. They never spoke again. Their careers went in opposite directions: Viril pursued an acting career and landed a stead gig with E-Trade, while Ben partied with Def Leppard and coined the acronym “TGIF.” To this day, Ben curses under his breath when the E-Trade commercials air, but if you watch closely, you’ll see a single tear roll down his cheek.

(this was slightly updated from the original version)

Thanks, and stay tuned for a *completely true* April Fool’s Day story tomorrow!

This entry was posted on Wednesday, March 30th, 2011 at 11:51 pm and is filed under humor and tagged with Tournament of Cuteness. You can follow any responses to this entry through the RSS 2.0 feed.

4 Responses to “Ben Is the Cutest Creature Alive! (Out of 27 Contestants)”