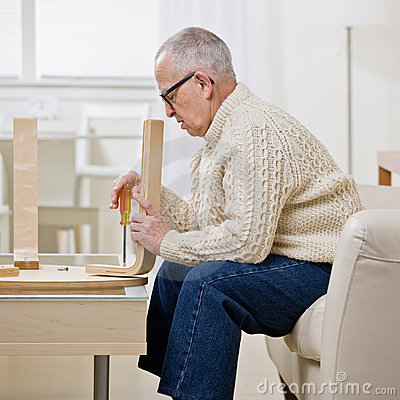 Faust and Sear were fierce rivals in the race to create an alternative to the nail in the 1930s. When both stumbled upon the idea of a screw on almost the exact same day (accounts vary), Sear chose to orient his screw’s grooves such that turning clockwise tightened the screw. Faust, sure that he had a catchier tagline, went the other direction.

“Hudson may have been one of the most beautiful men I’ve ever laid my eyes on,” said Faust, “but he never had a way with words. ‘Lefty loosey, righty tighty?’ Who’s going to remember that?”

Hudson Sear, who passed away in 1986, could not be reached for comment.

“There were times when I thought I’d give it another try. Sure, the world had already universally accepted “righty tighty,” but it only takes one screw to change everything.” Faust went on to note that he refuses to use Sear’s screws, opting instead to handcraft “lefty inflexy” screws in his garage.

Faust’s lesser-known inventions that never caught on were a toilet that flushes the other way and a gas pedal that decelerates instead of accelerates.

This entry was posted on Tuesday, March 22nd, 2011 at 11:56 pm and is filed under humor, Newsflash and tagged with humor. You can follow any responses to this entry through the RSS 2.0 feed.