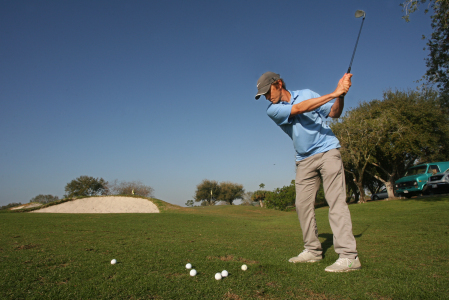 Malcolm Gladwell writes about the concept that 10,000 hours of deliberate practice can make you great…at anything. He uses the examples of Bill Gates, who started working with computers for hours each day when he was a boy, and the Beatles, who played long, long sets every night to make ends meet early on.

A guy named Dan McLaughlin read about that concept about two years ago and decided to test it out, with himself as the subject of the experiment. He quit his job and started playing golf for 6 hours a day, 6 days a week, for 6 years. The goal? To become a professional golfer.

The interesting thing is that Dan had never played golf before. He wasn’t even that interested in it. He simply thought it might be a good subject upon which to quantify expertise and success.

I think this is fascinating. It’s such a huge commitment. And there’s no looking back–Dan is 1,400 hours into the plan. If he quits early, he defeats the point of the experiment. Can you imagine committing to 10,000 hours of anything?

Granted, very few of us could quit our day jobs with enough money in savings to not work for 6 years. But if you could become a true expert at something that you know nothing about over the next 6 years, what would it be?

I’m not sure what my answer is (web and app developer comes to mind), but I find it doubly interesting that this magical 10,000 number can apply to relationships too. Look at your parents. They’ve spent at least 10,000 hours becoming the best at loving one another. They’re experts at being married to each other. I think that’s pretty cool.

This entry was posted on Thursday, April 28th, 2011 at 11:32 pm and is filed under leadership and tagged with leadership. You can follow any responses to this entry through the RSS 2.0 feed.