ST. LOUIS, Missouri (AP) – Following a series of food-related housing proclamations at the Soulard farmer’s market, a local man has decided to bake himself into a soft pretzels and live there from now on. 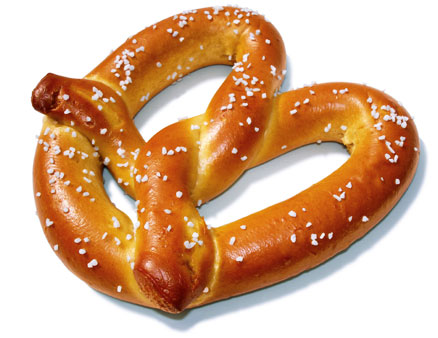 Jamey Stegmaier, 30, went to to the farmers market “for the first time in a while” this weekend. While perusing the fresh vegetables, fruits, baked goods, and other snacks, Stegmaier made an escalating series of food-based declarations, resulting in his pretzel decision.

Reports vary, but Stegmaier’s roommate says that the day began with the most innocent of comments. “When we first walked into the market, Jamey bought a bag of Wisconsin cheddar cheese curds. He made an offhand comment about wanting to climb into the bag and hang out there for a while. We thought he was joking at the time.”

Local haberdasher and n’er do well Trevor MacDougall confirmed this report, adding, “Jamey tried a little bit of the grill spices I bought, and he said something about wanting to wear containers of the spice on his feet like shoes. It seemed pretty innocuous.”

MacDougall’s wife, local celebrity and blogger Laura, agreed. “In hindsight, we should have noticed that Jamey wasn’t kidding. People don’t usually say that they want to fill a bathtub with soft serve ice cream or sew themselves outfits made of turkey bacon. But he just seemed to be having a good time–it was his first time at the farmer’s market in several years.”

Vendors indicated that Stegmaier’s claims were not so innocent. Anita Franning of Sikeston said that she caught Stegmaier rolling around in her homemade pasta noodles. And local farmer Ed Bigsby had to call security after he caught Stegmaier hollowing out a mango. “He was mumbling something about getting inside the fruit and rolling around in it as a mode of transportation,” said Bigsby. “Damn crazy if you ask me.”

It was only when Stegmaier found the Gus’ Pretzels stand that he officially declared that he would bake himself into a pretzel and live there from now on. “Or at least until I eat my way out,” he said. “They get stale after a while.”

This entry was posted on Monday, April 11th, 2011 at 12:00 am and is filed under Newsflash and tagged with humor. You can follow any responses to this entry through the RSS 2.0 feed.

One Response to “Local Man to Bake Himself into Pretzel, Live There”