With his departure from The Office last Thursday, Michael Scott leaves behind a legacy of bad management and good humor. I think the show will be just fine with him gone, yet his final episode episode moved me to tears. In honor of him, I’d like to ignore the myriad of poor leadership tactics he exhibited on the show and focus on the five good ones (the numbers fall in sequence with my blog’s Leadership Tactics): 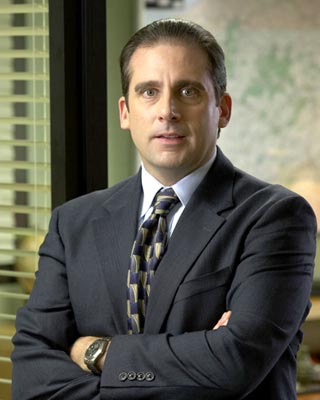 48. Make Your Employees Laugh: Although his jokes weren’t always tasteful, this was perhaps the greatest asset that Michael brought to the office. Amidst the drudgery of paper sales, he brought humor to the workplace. Just today an employee called me over to help her and several students hide Easter eggs in another employees office. I had plenty of work to do, but the three minutes we spent stashing plastic eggs could not have been better spent.

49. Celebrate Your Employees All the Time: It seems like there’s an office party on every episode of the show. It comes across as overkill, but does it ever really hurt to take a 10 minute break to celebrate an employee? Michael allows that to happen, and so should you.

50. Love Your Employees as Friends: Michael considers his employees his best friends, and there are several times throughout his time on the show that he is deeply impacted by the fact that his employees don’t always feel the same about him. As I watch the show, I have the same reaction as the other people in the office: I’m bewildered that Michael doesn’t have “real” friends outside of the office. But think about the sheer amount of time you spend with your coworkers versus your non-work friends. In terms of time alone, these are the people that you’re sharing your life with. They may not be your first pick as friends, but odds are, neither were your people on your freshman floor. I bet some of your closest friends are from that first dorm.

53. Be the Best at What Your Employees Do: There’s one memorable episode where Michael goes on some sales calls. At one, he talks to the client as if he talked to him all the time–he knew every detail of the man’s personal life. On another, he calls a rival company on speaker phone and is put on hold by an automated service for the duration of the sales call. While he’s on hold, he has the client call Dunder-Mifflin, and a salesman picks up on the first ring. Despite his naivety as a manager, Michael commands authority through his expertise.

54. Know Your Employees’ Favorite Candy: In Michael’s parting episode, he shared a piece of management advice with Darryl: “Everybody likes the guy who offers them a stick of gum.” Which is totally true. I take that a step further by keeping a spreadsheet of my employees’ favorite treats. There’s a sharp divide between milk chocolate lovers and dark chocolate lovers, so rather than risk mixing them up, I track them.

What did you learn from Michael Scott?

This entry was posted on Tuesday, May 3rd, 2011 at 12:42 am and is filed under leadership, television and tagged with leadership. You can follow any responses to this entry through the RSS 2.0 feed.