If You Could Write a Letter to Your High School Class, What Would You Say?

Here’s what I said in a letter I was asked to write for my high school’s latest fundraising campaign. Just so this makes sense, I should explain that I attended a magnet school in Virginia, which is like the institute the X-Men attended, except without Wolverine. 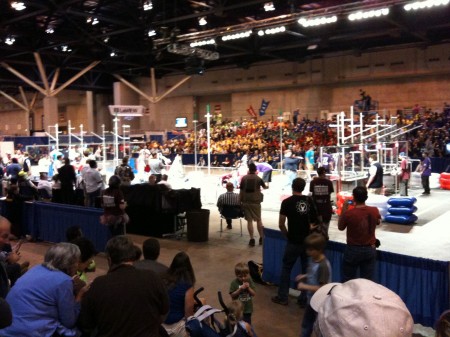 Last Saturday I went to watch robots fight each other.

This isn’t a typical weekend activity for me. But when I heard from a friend that the championships for an international competition called FIRST Robotics was taking place in the St. Louis football stadium, I was intrigued.

Turns out that FIRST isn’t about robots fighting robots (or even robots fighting humans), but it does involve a fast-paced sport with robot competitors. The robots are controlled and built by high schoolers across the world in a competition started by Dean Kamen, the guy who invented the Segway.

I wasn’t prepared for the sheer number of people who would show up for a competition like this, but I’m pretty sure there were more people at this event than at a typical Rams game. It was amazing. This was a huge deal for these high schoolers.

When I got home that day, I looked online to see if Maggie Walker had a FIRST team. Sure enough, they do (check out the comments—I couldn’t agree more with claren0812ceb_brunette). They weren’t at the championship, as they were defeated earlier in the year by Mills Godwin (really? Mills Godwin?) and a school called—seriously—Battlefield High School, which I’m pretty sure is run by robot warriors from the future.

Back in our day, we didn’t have Segways or Roombas or FIRST Robotics. We had Model UN and BOB Squad and We the People* and men’s baseball.

We had the insatiable desire to learn.

I don’t think we’ll ever truly comprehend the value of our time at GSGIS because we have no other high school experience with which to compare it. All we know is what it felt like to be surrounded by people who were just as—if not moreso—curious and brilliant and driven as we were.

I want the current and future generations of Maggie Walker students to have what we had: The opportunity to spend their formative years wading amidst a pool of students who want to learn as much as they do and teachers who are willing to push them. I want them to have the opportunity to participate in programs like FIRST Robotics.

And dammit, I want them to beat Mills Godwin.

Our class is about $1,000 short of what we donated to Maggie Walker last year. Given that these students are the ones who will be designing the robots that will brush our teeth and turn the pages of our Kindles in the future, I consider my annual gift a prudent investment. I hope you will too by clicking here to make a donation today.

*I should add that Maggie Walker recently won the nationwide version of We the People.

This entry was posted on Thursday, May 12th, 2011 at 10:52 pm and is filed under personal and tagged with personal. You can follow any responses to this entry through the RSS 2.0 feed.