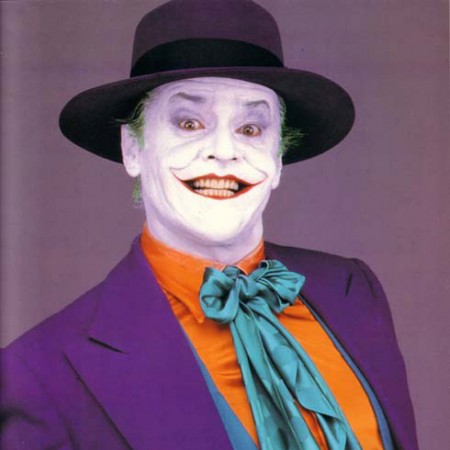 In the movie, The Joker (Jack Nicholson, in a role that people called “not as good as Heath Ledger”) devises a plan to infect the chemicals in commonly used cosmetic products. If used alone, the products have no negative reaction. But when they’re combined, they have a very creepy effect on their victims.

This is one of my greatest fears.

Not that there’s some diabolical madman out there trying to disfigure people. But I worry that mixing the wrong two chemicals–cosmetics, cleaning agents, soda and Mentos–will have disastrous results.

For example, today: I came home and found that Biddy had thrown up a little bit on my carpet. As throw-up goes, it was pretty cute. So I pulled out my trusty foaming carpet cleaner and sprayed the area to scrub it out.

But the bottle was almost empty. So I had to pull out another cleaning agent. And I have to admit, for a half second before I sprayed it on top of the foam, I thought for a second, “What if this explodes in my face?”

Fortunately, that did not happen.

Do you ever worry about this? Perhaps it’s a generational thing limited to people who saw that Batman movie when they were younger. I’m just curious if there’s anyone else out there who is slightly worried that their skin is going to burn off if their toothpaste touches their facial moisturizer.

This entry was posted on Wednesday, May 11th, 2011 at 11:38 pm and is filed under My Greatest Fear and tagged with superlatives. You can follow any responses to this entry through the RSS 2.0 feed.

Leave a Reply to Jasmin