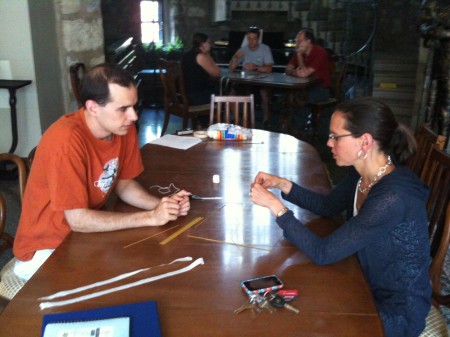 About a year ago, I watched a TED talk online about something called “The Marshmallow Challenge.” I was fascinated by this deceptively simple teambuilding exercise and the lessons it provided to groups, companies, and leaders.

So today I tried it at my work.

My organization isn’t huge, so we had seven participants divided into three teams. Each team was given the Challenge: Build the tallest freestanding structure with a marshmallow on top using 20 sticks of spaghetti, a yard of string, and a yard of masking tape in 18 minutes.

At the end of the time period, I asked for people to walk away from the structures. One team had been done for several minutes and were confident that their 19.5-inch structure would win. The other two teams were working until the closing seconds, and they barely got their marshmallows on top in time.

Both of those structures immediately collapsed, giving them a score of 0 inches.

You’re probably reading this thinking that you’d be able to win this challenge, or at least build a structure higher than 0 inches. That’s an assumption you’re making. And the key to this challenge is you can’t trust assumptions.

You see, when most people take part in this challenge, they spend the entire 18 minutes focusing on the string, the spaghetti, and the tape. The marshmallow–the overall goal, the most important part–is an afterthought, something you take care of at the very end. Many teams don’t even pick up the marshmallow until they’re ready to put it on top, and then their structure immediately collapses. 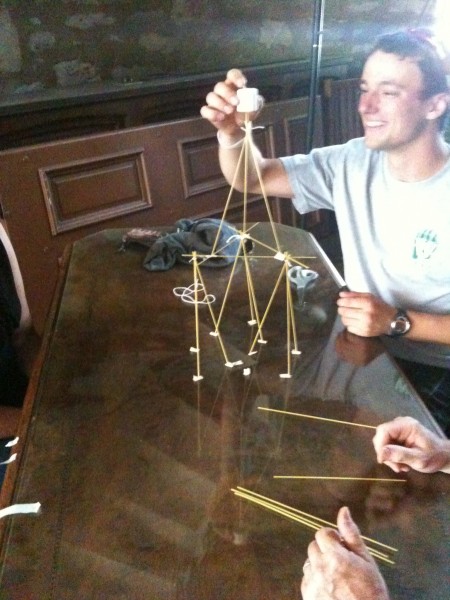 That’s because marshmallows aren’t as light and fluffy as our minds perceive them to be. At least, compared to spaghetti and string and tape they’re not.

Our most lofty goals aren’t always what they’re made out to be. That isn’t to say that we shouldn’t have goals–I mean, if I gave people spaghetti, string, and tape with no instruction, not much would happen. But it means that we need to examine our goals closely to truly understand the impact they’d have on our lives before we set out to achieve them. I talk about this a little bit in my post about wanting to become famous.

Surprisingly, the demographic that most often succeeds at this challenge are young kids. Kids play with that marshmallow from the second the challenge begins. Kids try out a dozen different structures during the 18 minutes. And unlike adults, kids don’t spend time jockeying for power.

If you’re a leader or a manager, try out this challenge with your staff this summer. I think you’ll be pleased with the results, and it’ll offer some insight to how your employees work in teams.

This entry was posted on Tuesday, June 7th, 2011 at 10:08 pm and is filed under behavioral economics, leadership and tagged with leadership. You can follow any responses to this entry through the RSS 2.0 feed.