If you want to fall in love, put yourself in a risky–even dangerous–situation. 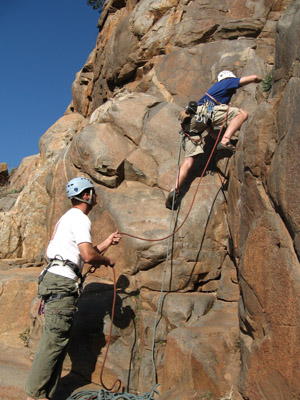 I read an article the other day about…well, essentially about the psychology of sex. The article started by summarizing a study done involving men who were put on a scary bridge with a female interviewer. One by one the men chatted with the woman. At the end of the interview, a number of the men asked the woman out on a date.

As the control, the same woman performed the same interview for a group of men in a completely normal, unscary setting. A very low percentage of the men asked out the interviewer.

A second study revealed that men and women (or, I’m presuming, homosexual couples as well) who put themselves in sticky situations where they have to rely on one another to get out in one piece are much more likely to end up having strong feelings for one another.

Think about going rock climbing with someone. Not only are you building trust and learning about how consistent and reliable the other person is, but also simply doing something where you’re relying on someone else while you’re vulnerable makes you like them more (and vice versa). Even if you weren’t in danger, when you’re done climbing the rock, you feel like you’ve gotten through something together.

I’m not saying that you should try to pick up women on bridges or go sky diving on the first date. But I am saying that the next time you find someone that you think you might actually like, do something risky with her. Eat a lot of undercooked meat together. Go to a wolf sanctuary and sneak into the off-limits areas. Cut “do not remove” tags off of mattresses.

Do something dangerous together, and watch the magic happen.

If you’re in a relationship, have you gone on any “risky” dates that you’d recommend?

6 Responses to “The Psychology of Sex #12: High Risk, High Reward”