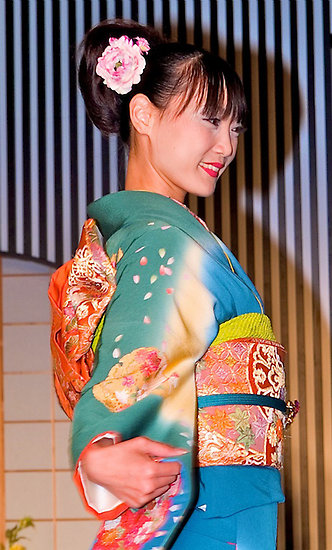 In all the hubbub about my fake birthday last week, I took a moment to reflect back on real birthdays from my past. There is one that I’m surprised that I haven’t already written about on the blog: My 21st birthday…with geishas.

The day was January 9, 2002. If you want to read about what happened that morning, read about it here (you’ll realize how much I really don’t like surprises if you read that entry). I was studying abroad in Kyoto, Japan, and I was working in a sushi restaurant after school as an English tutor.

Through the restaurant, a former yakuza (Japanese mafia) boss named Matsuyama-san had befriended me. I’m not making this up. I never really got the full story, but from what I heard, Matsuyama’s father was a huge mafia boss in Kyoto, but when he passed the family business onto his son, Matsuyama had cut out the illegitimate parts of the business and focused on the legitimate fronts (he owned a large shipping company). However, from the way people acted around him and the way he drove through the streets of Kyoto like he owned the police, I think he still enjoyed some of the perks of being a yakuza boss.

I hadn’t known Matsuyama for more than a couple of weeks when he learned that my birthday was coming up, and he insisted upon taking me to a geisha house. So that’s where I found myself on the evening of January 9, along with an American friend of mine, Arthur (just in case anything crazy happened), Matsuyama, a comedian friend of his, the owners of the sushi restaurant, and six geisha.

I should point out that I’ve been using “geisha” in the general sense; in reality, there were four geiko, one maiko, and one full-fledged geisha. They were all at various points in the training process.

You’re probably wondering when all of this turned into Japanese Sex Fest ’02. Sorry to disappoint, but it didn’t happen. Although Matsuyama regaled us with stories of his sexual exploits in that very same room when he was young, such things didn’t happen anymore. There is prostitution in Japan, but geishas are not prostitutes.

Instead, we were treated to an evening of dance, shamisen, food, and conversation. It’s the conversation that stands out in my mind above all else. The maiko interacted with us one-on-one, lingering for a few minutes with each of us before circulating. In those few minutes they have with you, you feel like the most important person in the world. You’re the most fluent Japanese speaker with the most interesting things to say and you are extremely funny. And yet despite all that, you feel like you’re having a conversation the entire time–it’s not like the maiko are school girls hanging on your every word. They just know how to make you feel understood, and they know the exact amount of information to share about themselves so you feel like you’re truly connecting with someone. In a way it’s completely manufactured, but isn’t all conversation?

I didn’t stay up the whole night chatting and drinking with the maiko; after a certain point, Matsuyama’s chain smoking got to me, and my head started throbbing. So I thanked him for the evening (renting the room had cost him about $1,500), bowed to the maiko, and walked out into the Kyoto night. Despite the pain in my temples, I knew that I had just experienced one of the most unique 21st birthdays–if not any birthday–ever.

This entry was posted on Sunday, August 21st, 2011 at 10:33 pm and is filed under Japan. You can follow any responses to this entry through the RSS 2.0 feed.

3 Responses to “My 21st Birthday…with Geishas”