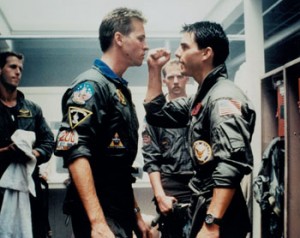 I had to Google "Top Gun locker room" to find this. The sacrifices I make for this blog...

Take a second to think about your last face-to-face interaction with a human being. How far away was your face from their face? Five feet? Seven feet?

If you lived in the movies, your face would have been less than a foot from your conversation partner. If it was a heated discussion, your noses may have touched.

See the difference between reality and the movies?

Believe it or not, I starred in a movie during my year abroad in Japan. Granted, it was a student film, and I am a terrible–terrible–actor, especially while speaking Japanese. But I actually was the star.

There was one fight scene where I had to duel with a karate master to prove my love to a beautiful alien woman. The scene started with the karate master and I glaring at each other face-to-face before the duel.

Seriously, we must have done 30 takes of a 5-second staredown. I could not keep a straight face. Because people simply never get that close to other people’s faces unless you’re about to make out! And yet we accept this as normal in movies and TV shows every day.

Finally we got a decent take, and I proceeded to throw the karate master into the arms of my trusty ninjas (they weren’t even in the movie–I simply had ninjas follow me around on a daily basis). But the experience left me with a newfound respect for actors. How they violate each other’s personal space on a daily basis, I do not know.

This entry was posted on Wednesday, September 14th, 2011 at 12:28 am and is filed under movies and tagged with contrivance, movies. You can follow any responses to this entry through the RSS 2.0 feed.