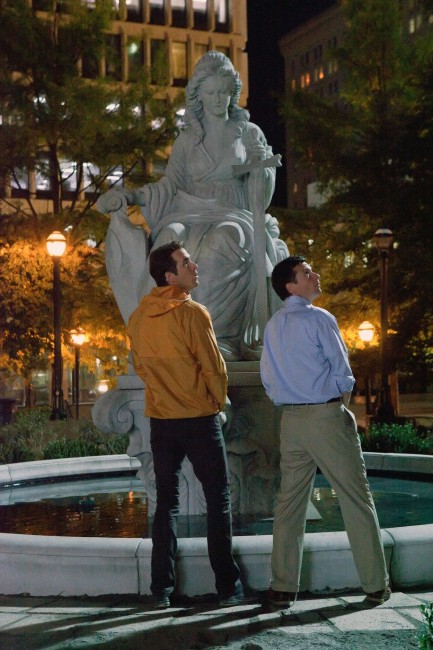 A few months ago, I got a text from a friend in my neighborhood.

“Bob and I are going to splash around in the public fountain. U in?” she wrote.

I texted back. “I wouldn’t step foot in those syringe-filled waters if you paid me.”

Obviously there probably aren’t fresh needles festering in the fountain in my neighborhood. But seriously, who wants to splash around in a public fountain? I guarantee you that people pee in there. Guarantee it.

And yet as noted by alert reader Sarah, people splash around in public fountains in movies all the time. I think they actually prefer it to sprinklers, fire hydrants, and backyard pools because they look better on film. If you’re transcendently happy in the movies, odds are you’ll end up in a public fountain. If you’re clumsy in a movie, chances are you’ll end up falling into a fountain in a mall. And if you get in fight in the movies, especially in England, part of the fight will take place in a fountain (see every Hugh Grant movie ever made).

I would say that people don’t step foot in fountains in real life, but as my friend’s text indicates, clearly people do. But I think this is something people do because of the movies. Movies have taught us that public fountains are good places to rejoice, fall, and fight. Life imitates art.

Have you ever willingly entered a public fountain? If so, please indicate the severity of the toe fungus that you developed immediately afterwards (on a scale from 1-10).

This entry was posted on Sunday, September 18th, 2011 at 10:16 pm and is filed under movies and tagged with contrivance, movies. You can follow any responses to this entry through the RSS 2.0 feed.