Contrivance #9: Walking Away in the Middle of the Conversation

Trev sent this contrivance to me a while ago, and I’m going to reprint it verbatim since he said it so well (with paragraph breaks for added drama): 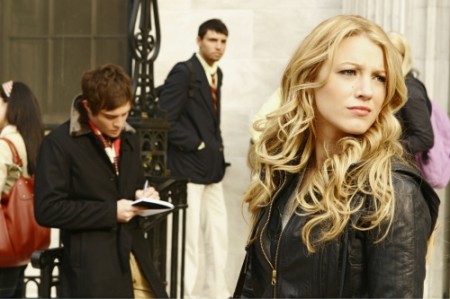 I'm using Gossip Girl for the photo because (a) this contrivance happens in every single Gossip Girl scene and (b) Blake Lively makes me lively.

In TV and movies, scenes always end with one person walking out of the room or just not saying somethng important.

This NEVER happens in real life.

Someone makes a key point in an argument and the other person leaves. Someone needs to say “I love you,” but he/she walks out instead. Someone needs to clarify something that is an obvious misconception, but instead one character leaves OR everyone just stands there quietly looking at each other when a one liner would obviously fix the situation.

This is BS. It does not happen in real life.

The entire Lost series was based around this, as are many soap operas and dramas. I once thought it would be fun to do a spoof of Lost that was either (1) nothing but the important lines that went unsaid or (2) just cuts of the important lines (and subsequent walking out/silence) before someone walked out or held his/her tongue when he/she shouldn’t have. I think it would’ve been a Youtube sensation 5 years ago.

I am genuinely surprised at the sheer number of conversations in movies and TV that end with someone walking out of the room. Especially when there are obvious things the other person could say, but they just sit there, inexplicably tongue-tied at such a critical junction.

Can you think of even one conversation in your life that ended with someone walking out of the room in the middle of the conversation. Even door-slamming “I’m so mad I can’t talk” usually end in some sort of punctuation. But when there’s a simple misconception on the line, like when a girlfriend catches you making a casserole in the kitchen with your au pair and it’s not what it looks like! Even then she sticks around while you explain in detail why you were really hot and couldn’t wear anything but the apron and sure, you don’t really need an au pair because you don’t have kids, but it’s so European and chic and yes, fine, I probably could have explained the difference between American thongs and foreign thongs to her. Even in that situation, you’d have the chance to say a few words before your girlfriend left.

This entry was posted on Tuesday, November 1st, 2011 at 11:51 pm and is filed under movies, television and tagged with contrivance. You can follow any responses to this entry through the RSS 2.0 feed.

10 Responses to “Contrivance #9: Walking Away in the Middle of the Conversation”