November 13th is my dad’s birthday, so today’s blog post is about him.

There are a lot of cool things about my dad, but I want to focus on a specific aspect of our relationship: sports.

When it came to sports, my dad was pretty much invincible when I was growing up. I’m guessing this is the case for most dads in the eyes of their 4-year-olds. Dad’s a skinny 5’11”,but he has that immeasurable Dad Strength that confounds physicists to this day. 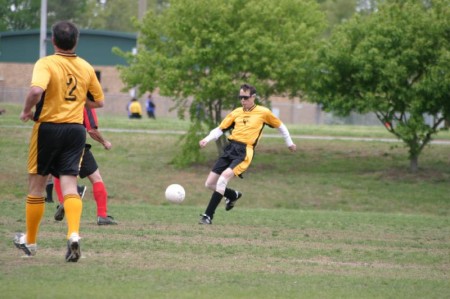 Dad played football and tennis in high school, and he was a precise basketball player on our home court, but he never pushed me into any of the sports in which he had excelled. We most often played tennis when I was growing up–Dad was the model of consistency and patience on the court. Emphasis on patience. Even though he easily outmatched me until college (and even then I was lucky if I won), he could volley with me for hours. Only now as I discern whether or not I want kids do I truly appreciate the patience that Dad had to meet me at my level on the court instead of playing at the peak of his abilities.

Dad and I would play football in the back yard. I would be Jerry Rice and he would be himself, and he would toss ball after ball to me as I dashed around imaginary defenders in the grass. When I picked up Frisbee, he learned to throw, and to this day he keeps me on my feet when I visit home or join the family at the beach.

There was one sport that I played that he knew nothing about: soccer. I’ve chose soccer as my sport when I was about 5 years old, and I still play to this day. And perhaps the coolest thing about my dad and sports is that even though he had never played soccer, at some point when I was growing up, he decided to learn.

I should point out that soccer is not an easy sport to learn as a 40-year old. The balance and footwork is much different from football, tennis, and basketball, all sports where the ball can’t even touch your foot. The learning curve makes it even more impressive to me that my Dad tried to learn the sport.

Also, I think there’s a level of humility required to learn something from your kin. Fathers generally take the roles of providers and teachers–they impart knowledge to their children and send them out in the world. It takes a big man to see that your son can do something that you can’t.

So over the years, I’ve taught my dad how to play soccer. It was an interesting process from the beginning, because it required me to break down the elements of the game to the core fundamentals: Where do you plant one foot when you use the other to pass? Where should the ball leave your foot? How do you know where to move when someone else on your team has the ball? 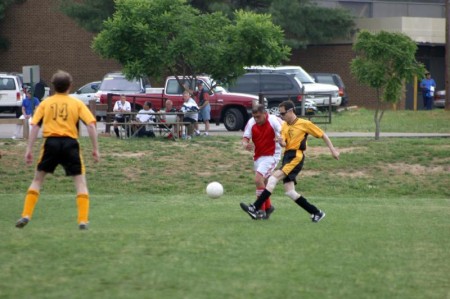 Slowly but surely, my dad learned. It was probably frustrating for him at times, because unlike all of those other sports, soccer did not come natural to him. But he caught on. He practiced with my team. He played pickup and adult league games when I went off to college. And we’d play in those games together during summer breaks.

I can’t pinpoint the exact year when Dad really started to feel confident about his game, but in the last few years, whenever I call home and ask about soccer, he almost always has a story to tell. There was the time he scored on a perfect volley. The time he delivered the perfect cross. The time he went shoulder to shoulder with a much bigger man and took the ball away from him. The time he juggled the ball for 50 consecutive bounces after dinner one night.

I am so fortunate that I’m able to share those little moments of joy with him. He probably had the same feeling when he watched me develop as a tennis player over the years. But it’s even more special to me that Dad was willing to learn the sport that I loved the most.

Dad, I love you, and I’m proud of you. I hope someday that I’ll be the type of sports father to my kids that you were to me. And I sure hope you’ll be around to see my son run across the yard as Jerry Rice for the first time.

This entry was posted on Sunday, November 13th, 2011 at 10:10 pm and is filed under personal and tagged with personal. You can follow any responses to this entry through the RSS 2.0 feed.