I love a good prank. By that I mean:

I walked out to my car on Friday evening to find a layer of ice coating the entire car, so I was scraping the passenger side of the car when I noticed a sticker adorning the passenger door. My first reaction was that someone had placed a permanent sticker on my car. But I quickly realized that it was a large magnet, not a sticker…and that it had my phone number on it. I snapped a photo. 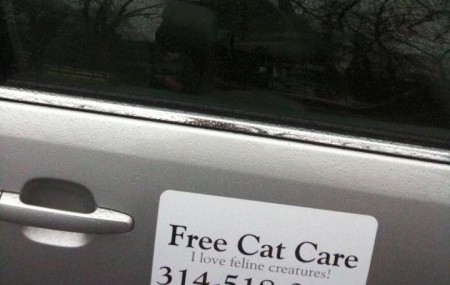 It was then that a few realizations struck me, causing me to laugh so hard for the entire drive home:

Of course, I had to post it on Facebook immediately. Within a few hours, the photo had generated more than 30 likes and over 40 comments. A few of my favorites:

From Jesus F: “I saw the magnet on Thursday morning and thought you were doing it on purpose for a blog post. I had one of those “oh, Jamey…” moments. Then it was still there yesterday, so I thought it was for real. And I thought, “Oh, Jamey…” again.”

My response: “That makes this even more hilarious, the fact that you (and possibly other people who know me) saw the magnet and didn’t even think it was a prank.”

And this one (I think I’m sooo clever):

From Sarah E: “I’d have loved to hear the story of when some girl with a cute phone voice called and you had no clue why she was asking you to “care for her cat”…now THAT just might take the cake!”

My response: “Especially if she uses a different word for “cat.””

In the end, it wasn’t until today that the prankster (my coworker, Linda) stepped forward. She was disappointed, as were many of the commenters, that I had discovered the magnet so early into the prank. I might consider putting it back on the car until I get a call or two, just for the story. We’ll see. What do you think?

This entry was posted on Monday, January 23rd, 2012 at 6:56 pm and is filed under April Fools, humor and tagged with humor. You can follow any responses to this entry through the RSS 2.0 feed.