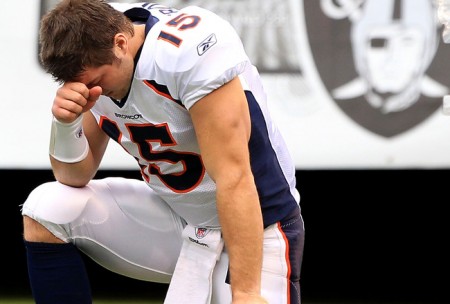 A few days ago I read a heartwarming article about the much-maligned Denver Broncos quarterback, Tim Tebow. Tebow was coming off a huge upset win over the Steelers despite a subpar season in which he completed fewer than 50% of his passes.

The part that really got to me was this quote from Tebow:

Here you are, about to play a game that the world says is the most important thing in the world. Win and they praise you. Lose and they crush you. And here I have a chance to talk to the coolest, most courageous people. It puts it all into perspective. The game doesn’t really matter. I mean, I’ll give 100 percent of my heart to win it, but in the end, the thing I most want to do is not win championships or make a lot of money, it’s to invest in people’s lives, to make a difference.

That makes me want to root for this guy. It’s hard not to root for him when you find out that he’s doing these types of things before the game:

Every week, Tebow picks out someone who is suffering, or who is dying, or who is injured. He flies these people and their families to the Broncos game, rents them a car, puts them up in a nice hotel, buys them dinner (usually at a Dave & Buster’s), gets them and their families pregame passes, visits with them just before kickoff (!), gets them 30-yard-line tickets down low, visits with them after the game (sometimes for an hour), has them walk him to his car, and sends them off with a basket of gifts.

After I posted the link on Facebook, a friend contacted me with her thoughts about Tebow and other professional athletes. I thought the way she described the delicate balance with which she respects Tebow and yet does not like the way the media (and his fans) puts him on a pedestal was beautifully written, so I asked if I could publish her e-mail below. Here are Neha’s thoughts:

As is generally recognized, Tebow is not a particularly skillful QB. That’s not to say he lacks talent, or that he doesn’t display potential to become great, but if you compare him to other QB’s, his athletic talent doesn’t account for the immense amount of attention he is receiving. The attention is derived from his public display of faith, which is polarizing.

Personally, I don’t agree with the detractors who criticize him for displaying his faith. He’s religious, and that faith doesn’t leave him when he goes to work–ok by me. What bothers me are some of his supporters (and Fox News), who use his personal expressions of faith to their own end–as support for the idea that our country unjustly persecutes people who want to display their Christian faith. 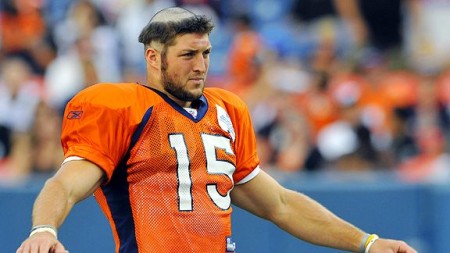 For one thing, that argument is just not true. For another, it’s hypocritical where many (not all) of the people in that camp are conservatives who either support, or are not offended by, actual religious persecution (i.e., where are all the supportive tweets when schools try to ban Muslim girls from wearing a hijab?)

Back to the original point–Tebow’s fame is coming not from athletic talent, but from the fact that he exhibits the traits of a good man. Traits like those found in that ESPN article you tweeted. He’s generous with his time and money, he’s modest, he’s loyal to his convictions. I think that’s great. But does that make me a “fan?” No, because I don’t think he should be given more credit than those who also exhibit those qualities, but at greater personal sacrifice, just because he’s a famous athlete.

In fact, I expect athletes in his position to do the things described in that ESPN article. I think our society has suffered because in the last few decades, our expectations of our fellow Americans has just deteriorated. I don’t get all these articles praising Tebow for being a great role model in a world of Michael Vicks. Why are we comparing down?

Just because there are irresponsible celebrities, do responsible ones get extra credit? Shouldn’t it simply be that Tebow is behaving in exactly the manner we should expect of someone in his position? And when you praise someone for doing something they should be doing anyway, aren’t you kind of reinforcing the notion that the behavior is special? And when something is “special” how can it become the norm?

Tebow is generous with his time and money, yes. I know so many wonderful people who don’t have nearly as much free time or money as Tebow who do exactly the things for which he is garnering accolades. And these people do their good work, at much greater personal sacrifice, even though they will never receive public adoration or attention. And quite frankly, when they do receive notice, like on a 10 o’clock news puff piece, the public doesn’t seem to care nearly as much as they do when the do-gooder is a celebrity. Knowing that these people exist, I EXPECT celebrities who are in positions of privilege, to do good things–they don’t get extra credit for it.

Here’s why: I want celebrities to be fully aware of the fact that for the most part, they don’t deserve the money they make, they haven’t earned it, at least not by my standards. Our society has decided that actors and athletes are valued at millions of dollars. This is true, even though those jobs, relative to many others, are quite enjoyable and dare I say, easier than many others. Athletes love playing their sport, I think it would be sufficient if their compensation was that they get to do what they love for a living, have fame and adoration, a voice that can make a difference, and a reasonable salary.

Instead, Tebow will make millions, and ye teachers, public defenders, social workers, police officers etc., struggle to make a living wage and support a family. I expect athletes to recognize that they are lucky, that there is a discrepancy in their pay, that they don’t deserve to make as much money as they do. And that recognition should manifest itself in them being good people, generous people.

So in sum, I’m not a “fan” of Tebow because he doesn’t have the skills yet for me to admire him as an athlete. And I can’t be a fan of him based on his good heart anymore than I’m a fan of anyone who is privileged and recognizes that and acts accordingly. I do respect him, and think he’s a good man, I just don’t think he should get so much attention for it. Otherwise, instead of being the norm, he will remain the exception.

This is Jamey again. What do you think? How do you feel about Tebow and the way the media treats him? Should all athletes be held to a high standard of generosity?

This entry was posted on Monday, January 16th, 2012 at 8:35 pm and is filed under guy talk, sports and tagged with guy talk. You can follow any responses to this entry through the RSS 2.0 feed.

24 Responses to “Should All Athletes Aspire to Be Tim Tebow?”