Who Should Rachel Have Ended Up With: Ross or Joey? 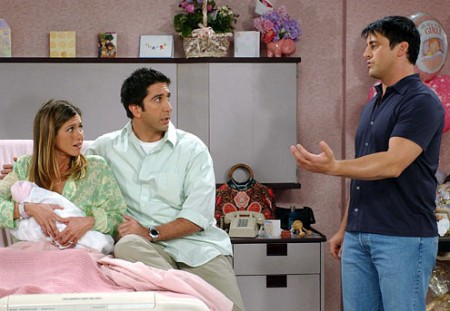 If you like this entry, feel free to check out my Kickstarter campaign for a board game I invented called Viticulture. If enough people pledge, I might be able to be convinced that Ross and Rachel are right for each other. 🙂

During yesterday’s sanction on avid commentors, I got more comments off the blog about Ross vs. Joey than on the blog! So I’ve decided to make it the topic of today’s post. For the sake of this argument, please suspend reality and assume that Friends is really, really important.

I’d also ask that you give Joey a chance. Sure, the show was written to emotionally drive us towards (spoiler alert!) the inevitable Ross and Rachel reunion, but does that make it right? Or were we falsely manipulated?

I would contend that we were. The writers of the show made us feel like Ross and Rachel should be together thanks to a string of dramatic moments, breakups and reunions. But really, let’s look at what’s behind those moments:

I simply don’t see compelling evidence that Ross and Rachel were “meant to be.” Now for the second part of my argument: Why Rachel and Joey are a much better pair.

Granted, I’ll contend that after writing about Ross and Rachel for 10 seasons, the writers had to let Ross and Rachel end up together. But I’m saying that they shouldn’t have spoonfed that love story when there was a much better one to be told. If Rachel and Joey were real people, they would unquestionably be the better fit.

What do you think? Obviously I’m open to your thoughts. And if you just want to cast a vote and walk away, please do so in the poll below.

This entry was posted on Wednesday, January 11th, 2012 at 12:21 am and is filed under television. You can follow any responses to this entry through the RSS 2.0 feed.

125 Responses to “Who Should Rachel Have Ended Up With: Ross or Joey?”